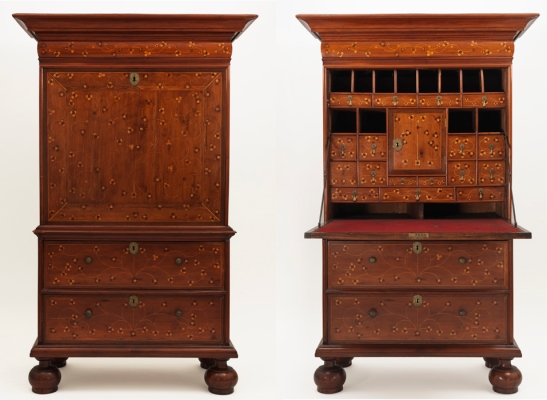 In preparation for the third and final phase of the renovation of the Museum of the City of New York’s landmark building, Collections staff de-installed New York Interiors: Furnishings for the Empire City. That gallery will be modernized with contemporary lighting, state-of-the-art climate control, and updated wiring.  One benefit of the de-installation was the opportunity to study the pieces and take high-quality photographs.

One of the most extraordinary of these objects is this fall-front secretary (45.112A-C), known as the Brinckerhoff Secretary, unique in that it is both the earliest example of inlaid furniture made in New York and the only known fall-front secretary from the Baroque (or Colonial) period.  It was made between 1700 and 1720 in the New York City area, and it is unusual in several ways: it features elaborate inlay (in a vine-and-berry motif) and is made of numerous woods — and its history dates back to one of the most successful Dutch families to establish residence in what was then called New Amsterdam.

The secretary is made of three separate parts.  The lower section rests on bun feet  (one of two areas not inlaid with the vine-and-berry motif) and features two large drawers, each with stamped brass escutcheon and lock with a round pull on each side of the lock.  The center section contains the fall front, and the separate cornice rests on its top.  The fall-front desk and secretary flap are supported by brass hinges, which are not original, and lined with baize.  The solid wood front conceals an interior with writing surface covered in red baize, 12 pigeon holes, 17 small drawers, and small cupboard with hinged door.  The small drawers each feature tear-drop brasses and the central (or “prospect” door) has a stamped brass lock escutcheon and below are two large open spaces separated at the center.

The heavily molded cornice top can be removed, revealing a concealed hinged secret compartment.  While many examples of case furniture made in the 18th and 19th century include some sort of secret or hidden space, the placement of such a compartment inside of the cornice is highly unusual.  This compartment could have been used to store documents, currency, or other valuables.

The first members of the Brinckerhoff family, Joris Dircksen (1609-1661) and his wife Susannah Dubbels (1602-1676), arrived in New Amsterdam in 1638 with their children, all of whom were born in the Netherlands.  Originally settling on what is now Staten Island, the family moved to what is now Flatbush, Brooklyn after the murder of one of their sons by a Native American.

The original owner of this piece was a grandson of the couple, either Joris Brinckerhoff (1664-1729) or Derick Brinckerhoff (1667-1748).  Their parents’ generation moved from Flushing and settled in Fishkill, on the Hudson River, where both grandsons were successful farmers.  The secretary was owned by their descendants and was first exhibited in the Dutch Alcove of the Museum on loan from Julia Brinckerhoff Clapp.  This secretary descended through eight generations of the Brinckerhoff family to Mrs. Clapp, who loaned it to the Museum in 1936, ultimately selling it to the institution in 1945.

The origin of the piece was once under dispute:  in a 19th-century publication on the Brinckerhoff family, the secretary is described as being “brought to New Amsterdam by Joris Direcksen Brinckerhoff, the first representative of the family in America in 1638.”   But more recent scholarship and scientific analysis strongly suggest the piece was made in the New York area.  Large pieces of furniture were very rarely brought from Europe by families or individuals planning to resettle in the New World and few ship manifests from the early-modern period include references to such cargo.  Microscopic analysis done in the 1970s solved the mystery — it identified the woods used as eastern white cedar, tulipwood, and red cedar, all American woods often found in furniture made in southeastern New York in the 17th and 19th century.  Other woods used in the secretary include cherry, beech, and walnut.

The Brinckerhoff Secretary is also a physical manifestation of the diversity of influences in early New York.  During the period this piece was made, Flushing was an English-settled town with numerous Anglo furniture makers and was an early meeting ground of cultures.  Although the elaborately inlaid design of meandering vines and flowers has sometimes been described as influenced by Dutch motifs, the origin of this distinctive vine-and-berry ornamentation is now believed to be southern Wales.  Stylistically, this piece also shows the influence of Quaker cabinetmakers: we know that similar inlaid furniture was made by Quakers in Chester County, Pennsylvania.  Early 18th-century Flushing also had an active community of Quakers (as the Museum’s exhibition Activist New York highlights).   Finally, the secretary also shows the persistence of Dutch taste after the English conquest — although the vine-and-berry pattern may be a legacy of Welsh influence,  the inlaid foliate and scroll motif, turned bun feet, and heavy cornice are all characteristic of 17th-century Anglo-Dutch cabinetwork.