The Museum of the City of New York is currently digitizing an extensive collection of artifacts excavated from New York’s colonial Battery Wall in preparation for public access and long term care at the Landmarks Preservation Commission Archaeological Repository. The Battery Wall once fortified the southwestern end of Manhattan island – underneath what is now Battery Park. This structure was uncovered as part of archaeological excavation work in 2005 during renovation of the South Ferry subway station. Tens of thousands of artifacts were uncovered, ranging from seeds and nuts, to ceramic dishes. These give a special window into life in colonial New York.

Artifacts like the coin and mug fragments shown below tell us about the kinds of objects colonial New Yorkers used, traded, owned, and made.  Cannon balls, such as the one also pictured, would have been a familiar object for soldiers at the Battery.

Cast iron cannon ball.  The cannons placed along the Battery Wall could have fired artillery like this.

Fragments of a decorated stoneware mug that was probably made by a New York potter.

Long hidden below the lawns of Battery Park, four segments of the colonial Battery Wall were found about 10 feet underground in the eastern portion of the park.  The Battery Wall was an important part of the colonial fortifications along Manhattan’s southern shoreline.  As a defensive sea wall, it not only stood sentinel against would-be foes, but also the relentless wind and waves of New York Harbor.  In addition to the colonial artifacts excavated at the Battery Wall site, the remains of coastal plants and animals like sea grasses and fish reveal how the city’s coastal environment has changed since the 18th century. 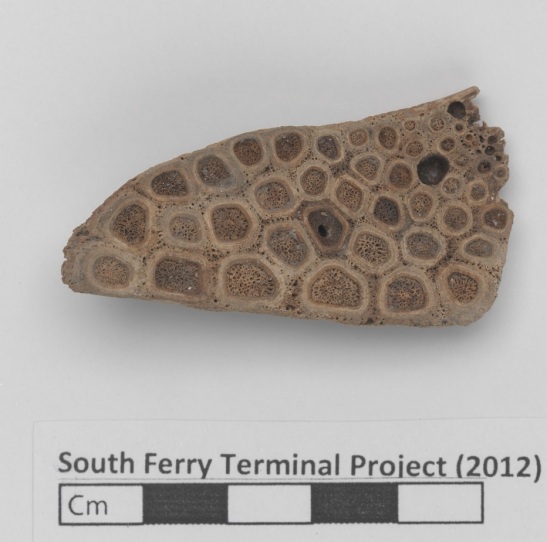 The teeth and jaw of a sheepshead fish are uniquely suited for eating shellfish. Plentiful oyster beds around Manhattan were once home to many animals that fed on shellfish, including the sheepshead, the fish that gave Sheepshead Bay its name. These fish were commonly consumed by New Yorkers in the past but now sheepshead are rarely found in New York’s waters due to the destruction of oyster beds and overfishing.

Detail of the “Plan of the City of New York” by Bernard Ratzer depicting the Battery Wall in 1766-1767. The approximate locations of the four wall segments excavated in 2005 are indicated with red arrows. Map image from the U.S. Library of Congress (accessed December 19, 2015).

The architectural ruins of the Battery Wall give us a glimpse of what colonial New York looked like.  Each of the four excavated segments of the Battery Wall differed in length and height but all were made of stone and measured about eight feet thick.  Each segment had an exterior and interior course of stone, one facing the water and the other facing the city.  The space between the two facades was filled with smaller rocks and soil and also capped with stone.  Research revealed that the wall was constructed during the 1740s and 1750s and was later buried under landfill as the colonial fortifications were demolished and Battery Park was created in late 18th and early 19th century. Dutch tiles uncovered from the Battery Wall are currently on view in the City Museum’s Activist New York gallery.

This L-shaped segment of the Battery Wall was probably part of a bastion that projected outwards towards the water where artillery could have been fired in several directions.  Image from South Ferry Terminal Project Report 2012.

Portions of each wall segment were carefully removed and preserved for exhibition.  You can see an L-shaped bastion segment (depicted to the left) on display at Castle Clinton in Battery Park.  You can also see another segment at the South Ferry subway station (shown below) where part of the old stone Battery Wall was incorporated into the station’s new tiled wall at the same depth it was found by archaeologists.

Soon everyone will have a chance to explore the objects uncovered by archaeologists at the Battery Wall in an online public database. This database will provide access to the collections at the New York City Archaeology Repository for researchers, archaeologists, scholars, educators, museum curators, and the public.

You can see a part of the old Battery Wall installed in the new wall at the South Ferry subway station. Images courtesy of author. 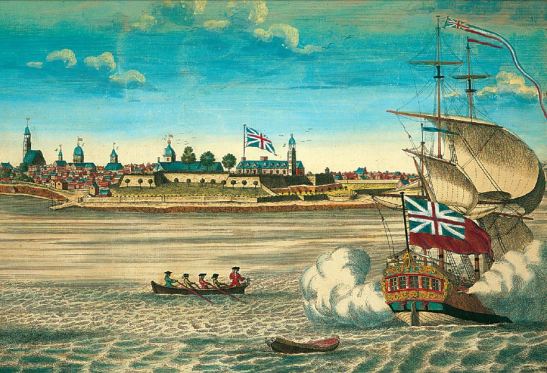 A depiction of the southern tip of Manhattan as it appeared in the 1730s just before the Battery Wall was built. “A View of Fort George with the City of New York from the Southwest” by John Carwitham/William Burgis. From South Ferry Public Report, May 2011.

Do you pass by the Battery Wall segment at the South Ferry subway station on your commute?  Do you remember hearing about the discovery of the Battery Wall in 2005?  Please share your experience with us in the comment section below!  Research inquiries may be directed to archaeology@lpc.nyc.gov.