In celebration of Martin Luther King Jr. Day and Black History Month, the Museum of the City of New York is exhibiting a portrait of Dr. Aubré de Lambert Maynard, by artist Yun Gee. Dr. Maynard is best remembered today for his role in helping to save Dr. King life’s after an assassination attempt in New York in 1958.

On Saturday September 20th, 1958 Dr. King was in the Harlem neighborhood of New York City on the way to sign copies of his book Strides Toward Freedom: The Montgomery Story, at Blumstein’s Department Store at 230 West 125th Street. A mentally ill woman by the name of Izola Ware Curry thread her way through the crowd to the front of the line and plunged a Japanese penknife into Dr. King’s chest. An article in last week’s New York Times provides more details, and shares the image from the front page of the Sunday edition of the New York Daily News of September 21, 1958, showing King seated with the penknife sticking out of his upper chest.  After her arraignment Curry was transferred to Bellevue Hospital where she was diagnosed with paranoid schizophrenia.

Following the attack, Dr. King was rushed to nearby Harlem Hospital, where Dr. Aubré de Lambert Maynard, an immigrant from Guyana, served as Director of Surgery and Surgeon-in-Chief. A huge crowd descended on the institution, including politicians, prominent surgeons from area hospitals, and reporters. Governor W. Averell Harriman rushed to Dr. King’s side. 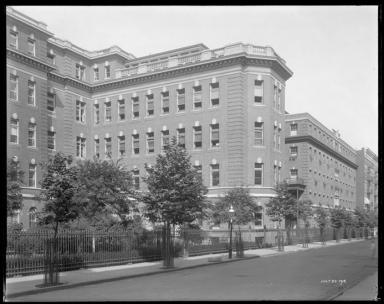 Upon his arrival, Dr. Maynard assured the governor that everything was under control, made a preliminary examination of Dr. King. Following consultation with his team of four doctors, Maynard oversaw the surgery performed by Dr. John Cordice and Dr. Emil Naclerio. In an interview with The New York Times in 1996 Dr. Maynard related that “It was a momentous time for Harlem Hospital because it was a man of Dr. King’s position who was known all over the world for what he was doing. For him to be brought to Harlem Hospital for a dangerous thing like that, where his life was at stake, it was a challenge. Could Harlem Hospital show that it was up to this task? You see, it was a city hospital, and it was looked down upon. It was up to me to show the world that it could be done there.”

On April 3, 1968, nearly ten years after the events in Harlem, and the night before his fatal assassination by James Earl Ray in Memphis, Tennessee, Dr. King referred to the incident in his famous “I’ve Been to the Mountaintop” speech, in which he acknowledges that had he as so such as sneezed, he would have died from the injury. 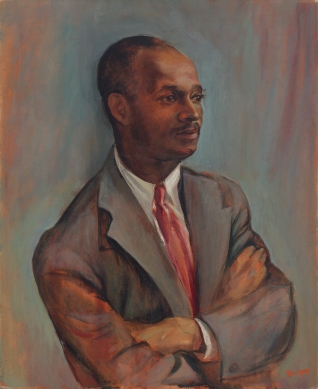 The Museum’s portrait of Dr. Maynard dates to 1942 and was painted by Yun Gee, a Chinese-American artist who moved to New York in 1929.  Throughout his career Gee painted portraits of people he admired, and the work was possibly painted by the artist in gratitude for Dr. Maynard’s earlier care for Gee’s wife Helen.  Upon donating the portrait to the Museum of the City of New York in 2000, Helen reported that she had “met Dr. Maynard when I was fifteen years old and he’d shown me great kindness. Treating me when I was ill and unable to pay for medical care. We remained lifelong friends, and a year before he died he gave me the portrait. I appreciated the gift but told him at the time that I felt it belonged in an institution rather than with me, and when I mentioned that I planned to offer it to the Museum of the City of New York, he was pleased.” In his art Gee embraced all races and cultures, and frequently depicted people of Asian, Caucasian, and African heritage. At various times in his life Gee encountered anti-Chinese sentiment, both in America and Europe, and his personal experiences helped instill in him a deep-seated empathy for individuals of diverse backgrounds.

We invite you to stop by the Museum through the end of February to learn more about the events of September 20th, 1958, as well as celebrate the lives of Dr. Martin Luther King Jr., Dr. Aubré de Lambert Maynard, and Yun Gee.

This post was written and researched by Bruce Weber, Curator of Paintings and Sculpture.