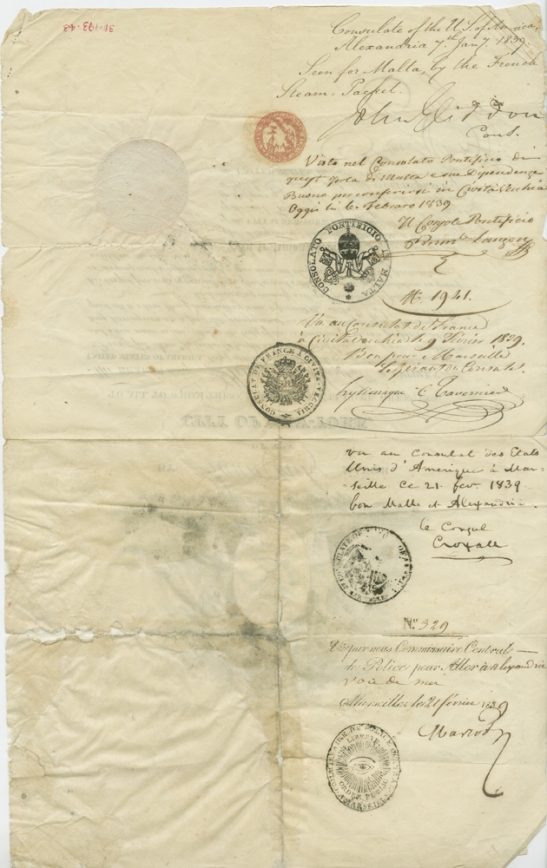 Henry P. Marshall was officially appointed U.S. Consul to Muscat, Arabia (present day Oman), on February 15, 1838, at twenty-four years old, after working in the importing houses of John R. Felix & Co, and Schoville & Briton.   In 1931, Mr. Marshall’s daughter, Miss Cornelia E. Marshall made a gift of several objects to the Museum, including many artifacts from her father’s days as Consul to Arabia.

Henry P. Marshall begins recording his journey to Muscat in his journal, just a few weeks following his appointment, on March 10.  The journal discusses his route from New York to Muscat, which takes him through Liverpool, Bristol, Falmouth, Gibraltar, Malta, Alexandria, Suez, and eventually Bombay.  This portion of his journey takes nearly three months, and in total, costs 149 pounds.   Marshall spends over four months in Bombay,  and his journal provides glimpses into the culture and festivals of the city, and he seems particularly intrigued by the Hindu religion. Finally, in late September, he makes the final leg of his journey to Muscat.  The drawing of Muscat below is an excerpt from Marshall’s journal.

According to his journals, Marshall spends just a year in Muscat, before resuming the voyage back to New York in the fall of 1839. All in all, he spends approximately seven months traveling from New York to Muscat, ten months in Muscat, then three months returning from Muscat to New York.  Among some of the other objects in the collection related to Mr. Marshall’s tenure as consul include the consular seal, pictured below, 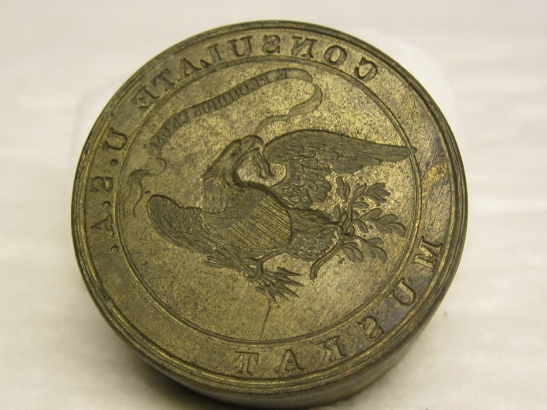 and his “sand glasses,” special eye-wear worn to protect the wearer from blowing sand in the desert.

In the process of trying to learn a bit more about Mr. Marshall, I discovered some discrepancy between his obituary in the New York Times, regarding the dates he served as consul.  The obituary states that Mr. Marshall did not begin his service as consul until sometime in the early 1840’s and returned to New York in 1844.  Of course, it’s possible that perhaps the journals we have were from a first trip to Muscat, and a second trip was made in the 1840’s.  However, we do know, from Marshall’s own hand, that he was first dispatched on his consular duties in 1838.  This is  just one of many examples in which primary sources help create a complete picture of history.  Following his return to New York, Mr. Marshall began working with the Seaman’s Bank for Savings, where he was employed until the day he died at his bank cashier’s desk, in 1888, at 74 years of age.