Fitness crazes are nothing new to Americans, and the 19th century had its own fair share of extreme exercise routines.  As lifestyles became more sedentary and health issues more numerous, 19th century doctors promoted a variety of exercises that would help keep people fit and healthy.

Gymnastics, running, and jumping were popular forms of exercise; but other, more unusual routines also became  trendy.  The exercise appropriately named “stepping through your own fingers” instructs one to hold a small piece of wood between his or her forefingers and leap over the wood; if practiced enough, one may even forgo the wood and perform this exercise using only the fingers.  Along a similar line, The Smithsonian Institute’s Conner Prairie quotes William Clarke’s The Boys Own Book’s description of the “Palm Spring” exercise:

[It ] is performed by standing with your face toward a wall and throwing yourself forward, until you support yourself from falling, by the palm of one of the hands being placed with the fingers upwards, against the wall; when in this position, you must recover your former erect station by springing from your hand, without bringing your feet forward.

Some of what became popular in the mid 19th century is still routinely accepted today.  Many of the stretches and gymnastics equipment depicted in the above print are now run-of-the mill. Some exercises in this print, however, may warrant a double take, particularly the man in the middle of the print who appears to be scaling the rafters.  It’s unclear what exactly he’s doing, but it is likely some kind of high-stakes rope climbing.  Readers, if you have any information about this particular form of exercise, please share!

Other early exercises look more like torture to modern eyes.  The Byron Company photographed the Zander Institute’s exercise equipment around the turn of the last century.  Zander’s equipment served two populations: those needing some form of physical therapy and those who found more traditional forms of gymnastics or calisthenics too challenging, but still wanted physical activity.  Women, the elderly, and “frail” people of either sex were ideal candidates for the latter category.  That being said, Zander’s apparatuses appear anything but gentle. 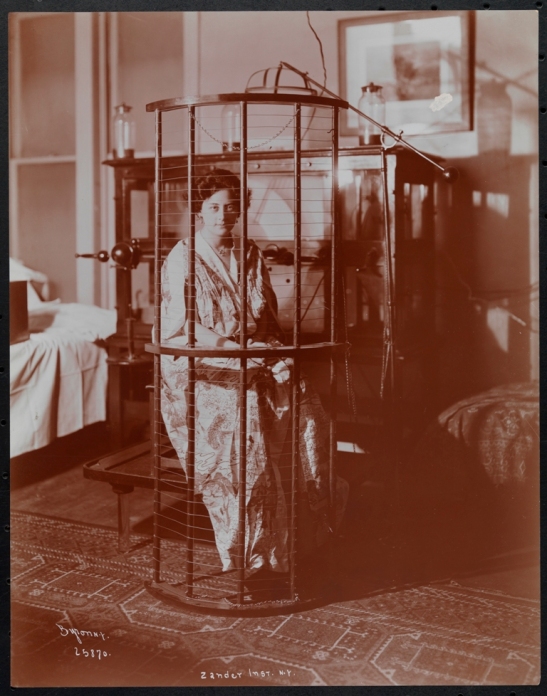 And though 19th century exercises range from the commonplace to the obscure to the strange,  some are just the plain-old cute. Witness the adorable calisthenics of the children below.

8 comments on “Fitness Crazes of Yesteryear”