New York has been the setting for many Christmas stories, fables, and traditions. In 1897, eight-year-old Virginia Hanson of 115 West 95th Street wrote to the editor of The Sun, asking if Santa Claus was real. The movie Miracle on 34th Street featured a man named Kris Kringle who began working as Santa Claus during the Macy’s Thanksgiving Day Parade. Department stores such as Bergdorf Goodman, Lord & Taylor, Barneys New York, Bloomingdales, Macy’s, and Saks Fifth Avenue attract countless New Yorkers and visitors with their engaging holiday window displays. Here we take a look back at some of the many ways New York has celebrated Christmas.

This picture shows teachers and students gathered around a Christmas tree in a tenement house run by a chapter of the International Order of The King’s Daughters and Sons. Margaret Bottome founded this charitable organization in her New York City home in 1886. The photo was taken around 1897. 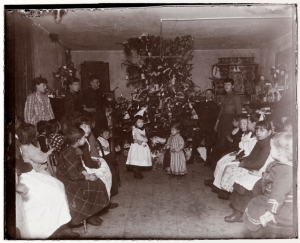 Jacob Riis took this photo around 1900. Riis, a first generation immigrant from Denmark, sought to improve the living conditions of impoverished New Yorkers by photographing their living conditions.

Although this photo was taken about 100 years ago, the hustle and bustle of New York’s streets during the holiday shopping season remains the same. 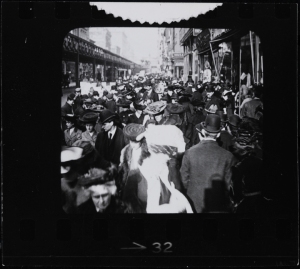 The Salvation Army began using red kettles in 1891 to collect money during the holiday season. In 1901, contributions to the red kettles in New York City provided the poor with a massive sit-down dinner in Madison Square Garden.  This 1906 photo shows a scene familiar to New Yorkers even today.

The Union Settlement House was founded in 1895 to serve the people of East Harlem. By 1900, more than 3,000 people relied on its services. This photo of caroling children was taken around 1940.

The Christmas tree at Rockefeller Center is lit every year after Thanksgiving. This tradition began in 1933. 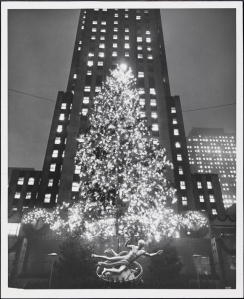 The Manhattan Savings Bank took a particularly festive approach to Christmas. These photos show the bank’s holiday spirit during the 1960s.