Lincoln’s last play; or, the continuing fascination with “Our American Cousin”

A distant cousin stands to inherit a large British estate on the brink of financial ruin. Sound familiar?  The main storyline from the phenomenally popular British series “Downton Abbey” shares its roots with the 19th century play, Our American Cousin, in which an American travels to England to survey his British cousins and his inheritance.  This past Sunday marked the 100-year anniversary of the sinking of the Titanic, the event that jump starts intrigues at Downton; and Saturday was the 147th anniversary of the most famous performance of Our American Cousin:  the night of President Abraham Lincoln’s assassination, April 14, 1865.

Written by English playwright Tom Taylor, Our American Cousin premiered in New York in the fall of 1858.  It starred Joseph Jefferson as the rough and rustic American Asa Trenchard who arrives at the British Trenchard estate as the last named heir.  Servants gossip, villains emerge from the shadows, and true love conquers in the end. A comedy with a melodramatic structure, much of the show’s humor was originally intended to spring from Asa’s crude and uncouth manners as an American in England. However, the ad-libs of Jefferson’s friend, E. A. Sothern as the foppish and silly Lord Dundreary, soon eclipsed the American cousin. 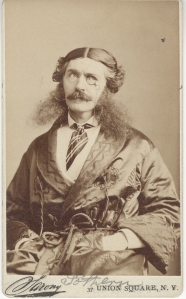 With expansive sideburns and dandified attire, Sothern transformed Lord Dundreary’s role from a bit part into a top billing character.  Sothern became almost synonymous with the role and was able to perform it in several sequels and spin-offs.  “Dundrearies” entered the popular lexicon as a term to describe the facial hair Sothern chose for the character.  Not a hundred years after throwing off British rule, it is perhaps no surprise that the idiotic sayings of a ridiculous Englishman were thought humorous by American audiences. 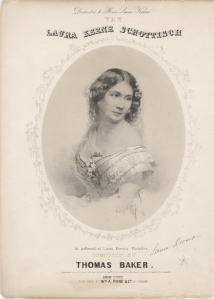 Neither Jefferson nor Sothern performed for Lincoln the night of April 14th, but Laura Keene, who played the show’s original heroine, Florence Trenchard,  was on the stage.

In fact, it was Keene’s company that premiered the show in New York at the theater she managed on Broadway.  A single mother with two young daughters, Keene came to the United States from England in 1852 with an invitation to perform with James William Wallack’s New York based stock company. By 1857 she had formed her own company, leased theaters in Baltimore, San Francisco and New York,  and built  her own theater at 622 Broadway.   One of her theater’s biggest hits was Our American Cousin.  Below is an a page from the Laura Keene’s Theatre’s ledger for a performance of the play two years after its debut.

Notes in the upper left corner provide information on the weather the night of the performance.  It was threatening rain on the evening of August 11, 1860, but that didn’t stop the audiences.

Our American Cousin wasn’t just the last play President Lincoln saw.  It  was one of the great commercial successes of its day.  It made a star our of E. A. Sothern and cemented the reputation of Laura Keene, America’s first successful theatrical businesswoman.   And 150 years later, the plot line still is still capable of capturing the imagination of a wide audience.  The images and information I was able to fit into this short blog post really are, if you’ll permit the allusion, just the tip of the iceberg.

4 comments on “Lincoln’s last play; or, the continuing fascination with “Our American Cousin””