The Great Crystal Palace Fire of 1858

The New York Crystal Palace was a cast-iron and steel structure completed in 1853  on the site of current day Bryant Park, located between 42nd and 40th streets to the north and south, the Croton Distributing Reservoir (current location of the Stephen A. Schwarzman  Building of the New York Public Library) to the east, and Sixth Avenue to the west.  The structure, designed by architects Georg J. B. Carstensen and Charles Gildermeister in the shape of a Greek cross, featured a dome at its center and was reputed to be fireproof. 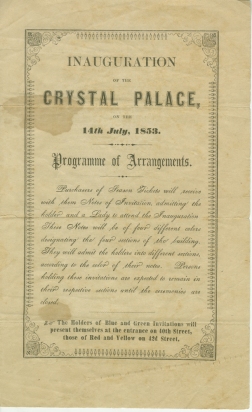 The Crystal Palace was built to house what is often thought of as the first United States world’s fair — known as the “Exhibition of Industry of All Nations” —  which opened to the public  on July 14, 1853.  The building and the exhibition were inspired by similar events held in London in 1851 and Dublin in 1852, featuring agricultural products and industrial innovations.  Elisha Otis first obtained widespread attention for his new invention, the elevator, at the fair in 1854.   The fair also celebrated the fine arts, showcasing a collection of sculpture and paintings.   While the fair included exhibitors from around the world, those from the United States were most numerous.

Initially, the fair was very popular and no visit to New York could be complete without a visit to the Crystal Palace.  Attendees purchased souvenirs that included canes, clothing, ash trays, medals, spoons, thimbles, and objects such as the plaque pictured below.

However, by the latter part of its first year, the Crystal Palace exposition began to suffer from declining attendance.   Theodore Sedgwick, the first president of the Crystal Palace Association, resigned and was replaced with the grand entertainer Phineas T. Barnum.  When the exhibition finally closed on November 1, 1854, despite the change in leadership and paid attendance exceeding 0ne million, the sponsors of the fair were left with $300,000 in debt.  When the Crystal Palace reopened, it was leased as a space for special events and continued to host the Fair of the American Institute, previously held at Niblo’s Garden, for the next few years.

Judge’s ticket during the 29th Annual Fair of the American Institute at the Crystal Palace, 1857, in the Ephemera Collection. Museum of the City of New York. 36.409.58.

Attendance to events at the Crystal Palace continued to dwindle and by 1856, according to The New York Times, it was considered a “piece of dead property.”  Perhaps the low attendance was considered a blessing when, on October 5, 1858, the Crystal Palace caught fire while hosting the American Institute Fair.  A letter in the Museum’s collection from Franklin Harvey Biglow to his sister Elizabeth Biglow describes being present at the Crystal Palace on the day of the fire, and how the entire structure collapsed in “not more than ten minutes from the time the alarm was given.”   Biglow was likely an exhibitor at the 30th Annual American Institute Fair, as suggested in his statement in the letter: “Very little of the immense value in goods & merchandise was saved.  My cases and contents went with the rest, my actual loss will not vary much from $900 dollars”–the equivalent of $23,050 in 2012.  Click here to view the full letter.  The total losses from the fire were estimated at approximately $500,000 (the equivalent of $12,802,150 today ), including the value of the building, exhibits, and statuary still installed from the time of the “Exhibition of Industry of All Nations.”  Nearly 2,000 people were inside when the fire broke out, but no one was injured.  The Museum also holds a chunk of glass salvaged from the burnt structure (accession number 36.407) in the collection.

Click here to view more images of the Crystal Palace from the Museum’s collection.