Mora – Photographer of the Rich and Famous

What do rich Gilded Age socialites, stuffed bears, and elaborate costumes have in common? They’re all features in these very atypical Gilded Age portraits. As I was cataloging the Museum’s immense portrait archive, I spent several months working with thousands of portraits of people who made New York what it is today. I would always linger, however, over one particular photographer’s cabinet cards (thin photographs mounted on cards usually measuring 4 1/4 by 6 1/2 inches).  His images have a sense of playfulness, fantasy,  and a vibrancy that I had never associated with Gilded Age portraits before.  Even more intriguing was that the sitters always had instantly recognizable last names like Vanderbilt, Belmont, and Rhinelander. I knew I had to discover more about this photographer,  one of the pioneers of photographic portraits in New York, and his unusual images. 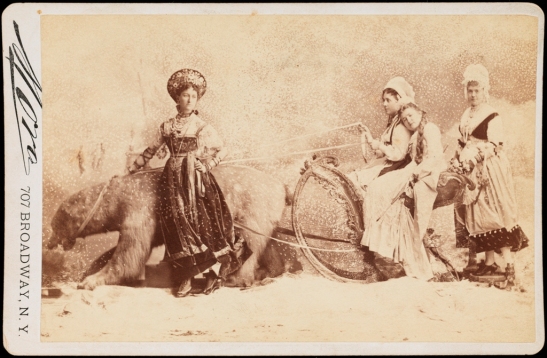 He was Jose Maria Mora, a young dashing Cuban refugee. Born in Cuba around 1849 to a wealthy family, he was sent to England to study painting and when the Cuban Revolution forced the rest of his family to emigrate to the States,  he joined them in New York. He quickly found employment at Napoleon Sarony’s photography studio, which at the time was the most artistic and well-regarded studio in the city.

In 1870 Mora opened his own studio and immediately became one of the biggest rivals to his old boss, Sarony. It didn’t hurt that he hired Sarony’s background painter, Lafayette Seavey, and soon had the largest collection of hand-painted backgrounds in the world at that time–over 150 different ones ranging from snowy city streets to Moorish ruins to forests, not to mention an arsenal of papier mache columns, balustrades, and rocks. Sitters would drape themselves over these objects in poses startlingly natural compared to the stiff positions into which other photographers literally clamped their subjects. These innovations paid off, and by 1878 Mora was making $100,000 a year shooting the stars of opera and stage in this new fashion of portraiture. (A more in depth discussion of Mora’s studio can be found here.)

An advantage of his well-born life was that he was able to mingle easily with the upper classes of New York.  Mora became the photographer of choice for the constant fancy-dress balls, tableaux, and other events of this era that required the upper class to get dressed up…which they did amazingly often.  His epic array of props added drama and intrigue to every image. These pictures also fed into the post-Civil War rise of the public’s fascination with the “lifestyles of the rich and famous,” and helped to create a visual definition of what that lifestyle entailed. 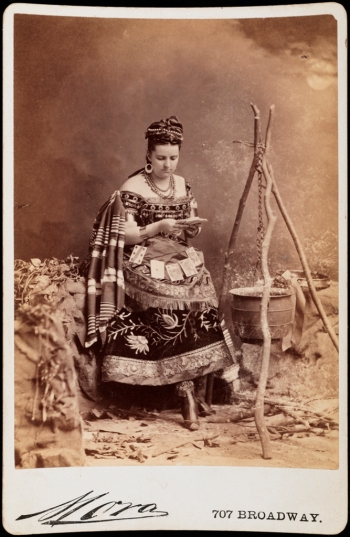 The bulk of the Museum’s digitized Mora images, however, come from one event: the Vanderbilt Ball. On March 26, 1883, a Who’s Who of Gilded Age New York society streamed into Mr. and Mrs. William K. Vanderbilt’s new home at 53rd Street and Fifth Avenue. The invitation stipulated that everyone wear a costume and New York did not disappoint. People were dressed in costumes based on characters from opera, history, and folk tales, each more resplendent than the next. (Stay tuned for an upcoming blog post about the ball itself.) The variety of backgrounds, poses, and props that made Mora the definitive popular portrait photographer are all on display and it’s clear why Mrs. Vanderbilt chose him to document one of the most memorable social event of New York City’s history. 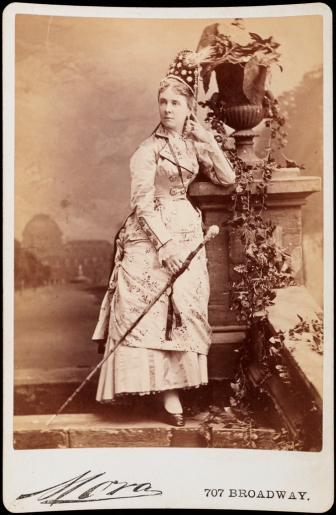 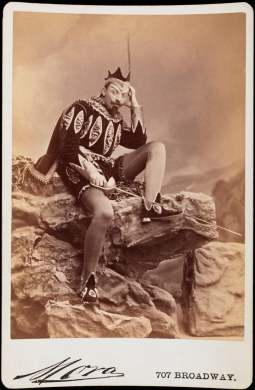 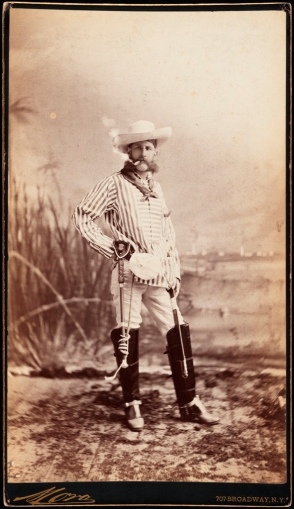 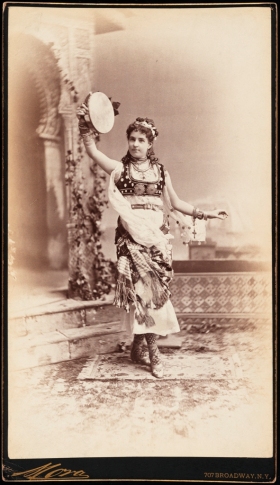 In 1893, abruptly and without explanation, Mora closed his studio at 707 Broadway. Some said that he went mad trying to restore the family fortune that had been lost in the aftermath of the revolution, but even now nobody knows for certain. For about 30 years, nothing was heard from or about Mora and his name gradually began to fade into obscurity. This remained the case until a 1926 New York Times article painted a bleak picture of his life as a recluse in the Hotel Breslin (now the decidedly more posh Ace Hotel). Mora had lived there since 1911, surviving on a diet of 15 cent pies and whatever else fellow residents were generous enough to give. His padlocked room contained his only company – starving, half-dead pigeons. He surrounded himself with memories of a better time – yellowed newspapers and theater programs filled with the names of stars he had photographed decades before. Sadly, he was declared incompetent and died a few months later at St. Vincent’s Hospital, leaving nearly $200,000 untouched in his accounts. (New York Times)

Many thanks to Collections intern, Erin Pauwels, for her insight into Mora and costume balls.

4 comments on “Mora – Photographer of the Rich and Famous”