“145 Bluebells of Scotland and a Swiss Cheese to You!” – Corresponding with Carl Van Vechten

There are many valuable records in institutional archives, and exhibition records contain an abundance of historic information documenting the long and arduous process of planning exhibitions: from the inception of the idea, to the proposal, to research and planning, to promotion, and finally the execution. One of the pleasures of working with the Museum’s exhibition records has been the treasures I’ve found along the way, such as recipes for old-time New York cocktails from Dining in Old New York (April 10-October 15, 1937), and the work of Carl Van Vechten, an artist I was not familiar with before.

While examining the records for The Theater through the Camera of Carl Van Vechten, an exhibition which ran from November 1942 to January 1943, I was delighted to find the correspondence between Van Vechten and May Davenport Seymour, curator of the Theater Collection (known at the time as the Theater and Music Collection). Van Vechten and Seymour’s correspondence provides the reader with pertinent information about the exhibition, including opening and closing dates, performances, lists of guests who attended the opening, as well as a view into the era in which the exhibition was held, and insight into the personalities of both the artist and the curator.

It is no surprise that Van Vechten’s letters would be well written; before mastering photography he had a career as a journalist, arts critic, and novelist. Van Vechten, or Carlo, as he was known to his literary and artistic circles, was a devoted pen pal who corresponded with Florine and Ettie Stettheimer (their sister Carrie created the Stettheimer Dollhouse which is currently on display on the second floor of the Museum), Gertrude Stein, H. L. Mencken, Langston Hughes, and many others. 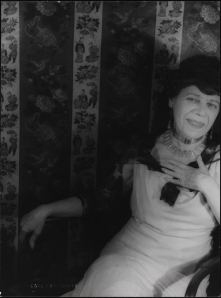 Van Vechten’s letters are filled with charm, originality, and wit – especially regarding his salutations and valedictions – making them a delight to read. As seen below, Van Vechten used a very colorful choice of stationary edged with flowers, his name in bold rust, top center.

Letter from Carl Van Vechten to May Davenport Seymour, November 17, 1942. Museum of the City of New York, Institutional Exhibition Records.

In this particular letter the closing is the jewel: “156 camels hair shawls to you and the fragrance of myrrh, to say nothing of fifteen bowls of terrapin Maryland and a glass of champagne!” Seymour gets into the spirit in her letter to him dated November 19, 1942, responding, “Please think of me wrapped in the 156 camels hair shawls, drenched in myrrh, munching the terrapin while I sip the champagne, crooning ‘God Bless Carl Van Vechten.’”  The quote featured in the title of this post, “145 Bluebells of Scotland and a Swiss Cheese to You!”  is another example of one of Van Vechten’s characteristic salutations.

It is important to note that the country was at war; to mount an exhibit and get people to attend was a feat in itself.  Seymour conveys her appreciation to Van Vechten in her letter, stating, “We sold 131 catalogues and there were 259 people…it was the best attended opening, both in quality and quantity, that we have had for a very long time and I am still thrilled.”

Van Vechten’s warmth, generosity, creativity, and quirky spirit also infected his portrait photography. Although he expressed a life long interest in photography, he did not begin devoting all of his time to taking and developing his own photographs until he was in his early fifties, when a friend, Miguel Covarrubias, familiarized him with the 35mm Leica camera. Van Vechten had cultivated relationships with many artistic personalities through his work as a writer and critic, and his forays to Harlem to socialize with intellectuals, artists, and entertainers.  He also interacted with performers and entertainers on a regular basis through his volunteer position as the floor captain at the Stage Door Canteen, a nightclub for Allied servicemen sponsored by the American Theater Wing.

Van Vechten’s original intent was not to exhibit his work but to “photograph everybody and everything in the world!” His aspiration, his subjects, and his use of fabric backdrops (which he said were interpretations of Matisse paintings) coupled with his flair for dramatic lighting, pattern, and contrast became a recipe for success. 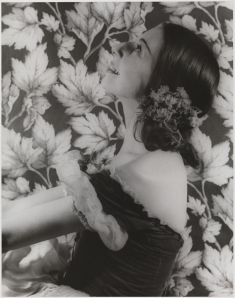 Van Vechten went on to produce about twenty thousand photographs, none of which he ever sold. All of his photographs were made at his own expense and usually given to the subject of the portrait, other friends, or photography collections.

Around the time of his exhibition at the Museum of the City of New York, he may have been thinking about his legacy. In 1941 he donated his papers to the New York Public Library and a collection of photographs documenting the Harlem Renaissance to Yale University.  The Museum of the City of New York was the recipient of  four-hundred portrait photographs taken from the early 1930s through 1942, of actors, playwrights, set designers, musicians, singers, orchestra leaders, dancers, and night club entertainers.  Of these, Seymour chose 104 for the exhibition discussed above, The Theater through the Camera of Carl Van Vechten.  Here are some of the featured photographs that inspired so many patrons to make the trip uptown in the winter of 1942-1943: 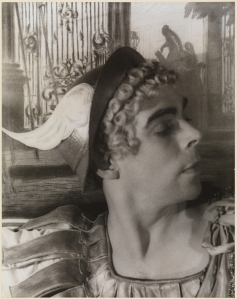 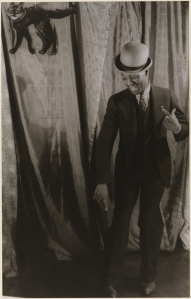 Visit the Museum of the City of New York Collections Portal to see more of Carl Van Vechten’s photographs.

One comment on ““145 Bluebells of Scotland and a Swiss Cheese to You!” – Corresponding with Carl Van Vechten”