What skating rink is that? Who lived in that house? Solving mysteries in the collection.

From time to time, the Collections Department receives inquiries from the public about the information associated with images we’ve cataloged online.   The data in the catalog records is pulled from inscriptions on photographs, and from photographers’ logs, notes, and shot lists that were acquired along with many of the Museum’s major photographic collections, such the Wurts Brothers  or Byron Company.  When we notice something that seems incorrect, we conduct further research, but generally, we consider these materials primary sources, and with collections numbering in the tens of thousands of images, must trust that the photographers kept accurate records.   Nobody’s perfect of course, and from time to time a researcher, or just someone browsing images on the Collections Portal, comes across an image they feel has been misidentified and reaches out to us, often through the research@mcny.org email (to learn more about our collections research services, check out the research page on the Museum’s newly redesigned website!)

One such situation occurred when we were contacted by a researcher from the Cooper-Hewitt National Design Museum, which resides in the former Andrew Carnegie family residence on Fifth Avenue and East 90th Street.  The Cooper-Hewitt had, in turn, been contacted by a preservationist, who was seeking to confirm the address of an even earlier Carnegie residence.  That researcher referenced the photograph to the right from our collection, which at the time was identified on the Collections Portal as “Old Carnegie Residence. 15 West 51st Street.”  That description came directly from one of the Wurts Brothers photography logs, shown below. If you enlarge the image of the log book, you’ll see on the bottom right corner of the right page the description of the photograph: “Aug 19 1932. Fred R. King. […] Photo Old Carnegie Residence. 15 West 51 St.” Or does it actually say 5 West 51 St.? It’s hard to tell.

The preservationist who contacted the Cooper-Hewitt wasn’t even interested in the Carnegie Mansion, she was interested in 15 West 51st Street, in relation to a preservation project her firm had underway.  The Cooper-Hewitt confirmed that the Carnegies lived at 5 West 51st, not 15 West 51st, but they then looped us into the conversation to determine the actual address of the residence pictured above.  The Cooper-Hewitt had been seeking an image of the house at 5 West 51st Street, to no avail; all they had found was the elevation to the left, created when the house was originally built in 1879 for George Mosle by Detlef Lienau, which they supplied to us.

We  zoomed in on the photograph in question (you can do this too – clicking the photograph will take you directly to our Collections Portal, where you can use the magnifying glass icon to  see the details.) There was no address visible on the building, but there was a sign indicating that the structure had recently been sold. Going back to the log book, the name Fred R. King was associated with the address. Frederic Rhinelander King (1887-1972) was an architect; notably, he designed the Women’s National Republican Club at 3 West 51st Street, built from 1933-1934.  The Wurts Brothers probably took the photograph for King just before construction of the clubhouse.

With over 125,000 images available online, our Collections Portal is often the best source for identifying discrepancies in catalog records. We found the image to the right, then identified as “[Perhaps] West 51st St. #7. Graves House.” It looks much the same as in the first photograph, and to the right of it is the original building in question. At this point we were confident in identifying the original image as 5 West 51st Street, and the image to the right as 7 West 51st Street.  When we looked back at the elevation supplied by the Cooper-Hewitt and compared it to the photograph, certain common architectural details – such as the balustrade under the third story windows – began to emerge, affirming that in fact we’d identified the early Carnegie Residence, 5 West 51st Street.  Good news for the Cooper-Hewitt; not so much help for for the preservation planner. 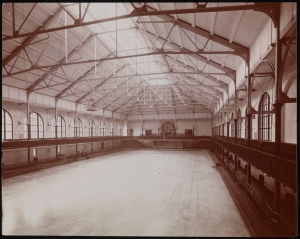 Pictured to the left is another misidentified image brought to our attention by a researcher. The photograph was originally described by its creator Byron Company as “Rinks, Iceland Skating Rink, B’way 53rd Street & 7th Ave.” The date given was 1898. But as the researcher pointed out, Iceland skating rink did not open until 1916. We weren’t certain if the title, the date, or both were incorrect. We zoomed in on the image. This revealed a group of people sitting on the sidelines to the left. Their attire led us to believe that the given date of the photograph, 1898, was indeed correct. So now we knew that the photograph wasn’t of Iceland skating rink – but what was it? We looked at rinks on the Collections Portal, but nothing matched the image. We wondered if it could possibly be St. Nicholas Rink, before it became a full-time boxing arena.

St. Nicholas Rink opened in 1896 on 66th Street and Columbus Avenue and was one of the first enclosed ice skating rinks to take advantage of refrigeration technology. The facility has an entry in Wikipedia with an accompanying image. The image on the Wikipedia page gave us hope that the Museum’s photograph was of St. Nicholas Rink. In the Streetscapes column published February 6, 2005 in the New York Times, Christopher Gray writes that the building was “a broad, industrial-like structure with a procession of high brick arches in neo-Classical style…” After reading this description and seeing the photograph of the rink’s exterior published with the article, we believed that the Byron image showed St. Nicholas Rink.

We are grateful when someone points out questionable information on the portal, and continue to invite comments. If you have insight into an image on the portal, email us at collections@mcny.org.  In addition, the Museum shares a “Friday Mystery Image,” every week on our Facebook page.  Check in around lunchtime each Friday if you’d like to help us identify unknown images in our collection.