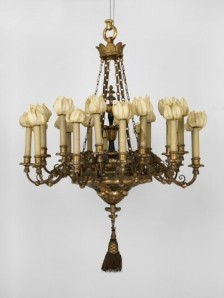 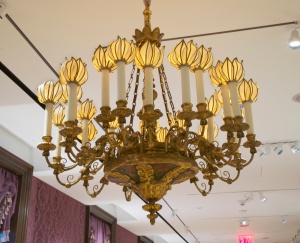 Object conservation presents an opportunity to learn about aspects of an object’s history that cannot always be revealed by researching secondary sources.  Conservation done for the re-installation of a chandelier (MCNY 49.166.4) from the home of Harry Harkness Flagler (1870-1952) and Anne Flagler (1870-1939) in Gilded New York, the inaugural Tiffany Foundation & Co. Gallery exhibition on view now at the Museum of the City of New York, resulted in new information about the manufacture, materials and use of this distinctive object. 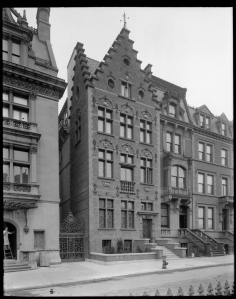 Harry Harkness Flagler was a son of Henry Flagler, a founder of the Standard Oil Company and a major real estate investor on the East Coast.  Harry Flagler did not follow his father into business but instead worked in various roles at music-related organizations including the Permanent Fund Orchestra, the Philharmonic Society, and the Symphonic Society of New York.   The architect Richard Morris Hunt designed the Flagler home at 32 Park Avenue around 1868 for William H. Osborn.  The Flaglers purchased it in 1901 and hired the architectural firm Little and O’Connor for an extensive renovation.  Willard Parker Little of that firm designed the room in which the chandelier was installed:– the music, or drawing room, a public area of the house.  The room was inspired by a similar space in the Ducal Palace at Mantua and the ceiling copied from a building in Venice.  After the death of his wife, Harry Flagler made plans to move to an apartment on Fifth Avenue and the music room, called “one of the most beautiful modern rooms in America”[1] and most of its contents were transferred to the City Museum in 1949.  This room and its contents were on display from May of 1949 to October 2012. 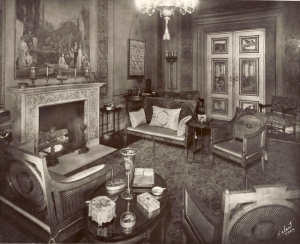 The Flagler period alcove, 1949. Museum of the City of New York. Institutional Archive.

Plaster  images of seraphim, the highest choir of angels, decorated the coffered ceiling in the music room and the chandelier was integrated into the ceiling through a rosette cornice and a section of plaster featuring each of the four archangels, one at each corner.  The suggestion is of a rarefied air in which heavenly music could be heard.  This conceit also reflected the Flaglers’ love of classical music and art–they were well-known as patrons and leaders of symphonic organizations in New York City.  The placement of the chandelier in this room had symbolic and practical use.  Its practical use was as a light source, and its floral shades, painted motifs, and golden surface suggest abundance, wealth, and artistic inspiration. 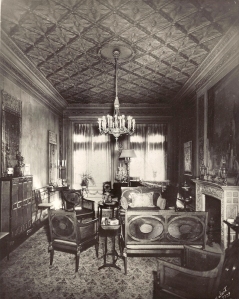 The drawing room at the Flagler home at 32 Park Avenue, early 20th century. Museum of the City of New York. Institutional Archive.

In anticipation of the conservation project, I set out to research the manufacturer and craftsmen who created this work.  With this information, it would be easier to return the surface to its original state.  Gilders, painters, and designers each have an individual style and identifying who made it would aid in the conservation process.  Since the chandelier’s accession into the City Museum’s collection, it was thought to be of English or French origin;  –I suspected, however, it was made in New York City.  Perusing correspondence Harry Flagler and the City Museum, I found a passing remark informing the Museum that should more floral shades be desired, they could be ordered from “Caldwell.”  The Caldwell to whom he is referring is the Edward F. Caldwell Company (1895-1959).  The Caldwell Company made lighting devices and numerous other interior and exterior fixtures representing a remarkable degree of quality and diversity.  Extant fixtures can be seen today in the Frick Collection, Vanderbilt Mansion in Hyde Park, New York Public Library, and many other buildings, many closely associated with the Gilded Age.  The majority of the company’s archives are stored in the library of Cooper-Hewitt, National Design Museum.[2]  Perusing this online repository, I came across a design for the model used in the Flagler home.  This discovery supports two conclusions about the chandelier: 1) it was not custom-made for the Flagler house, and 2) its painted surface and floral shades were customized for the room.  After research at New York Public library (which holds another major group of archival material on the firm) I was not able to determine which craftsmen worked on it (at its peak, the Caldwell Company had over 1,000 employees) but a more accurate date is now associated with the object:  1906.  This design does not appear in any of the Caldwell job books before 1906.  This is also the year the Flaglers moved into the home and it may be assumed the chandelier was complete and installed at or near this time.

Gilding most commonly refers to the application of gold leaf as surface decoration, usually on top of wood or plaster.[1]  When a surface is water gilded, it is first given several coats of gesso.  When the gesso is dried, binding agents such as glue and rabbit size (size refers to animal glue dissolved in water) are applied and water brushed on top before the gold leaf is placed on top.  This surface is matt and can be brightened or burnished but remains extremely fragile.  Oil gilding is most commonly used on flat surfaces and is more durable than water gilding.  The surface is first painted with glue size and when dried painted with coats of oil paint and a coat of “flatting” which reduces shine.  On top of this is painted size mixed with oil and pigment.  This can take many hours to dry and the gold leaf is applied before the drying process is complete.  The gold leaf is later set by gently dabbing the surface. 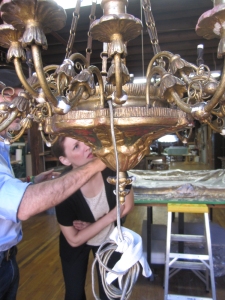 The main challenge in the conservation of this chandelier was to address the shrinkage that occurred in the wood over time, which affected gilding on top of it, making it less stable and more sensitive to changes in moisture and temperature.  Giovanni Bucchi, master gilder of Ennio Restorations, conserved all gilded surfaces.  This process began with a gentle cleaning, which itself revealed the original painted, patinated, and gilded surface.  The appearance of the original surface allowed existing patina to be used to cover the water and oil gilded surface.  A combination of water and oil gilding with bronze-color paint was used in areas too deep to use gold leaf with patina on top of the gilding.  The completely restored gilded surface will not reverse the natural processes of the wood but greatly stabilizes the surface, making possible the chandelier’s installation and exhibition. 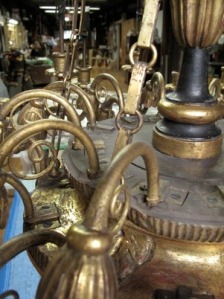 Image after cleaning showing techniques used on original surface: the brass chains, the central column which is water gilded on gesso, the arms of the chandelier which are oil gilded over metal, and the base or font which was burnished water gilded. Image courtesy Giovanni Bucchi. 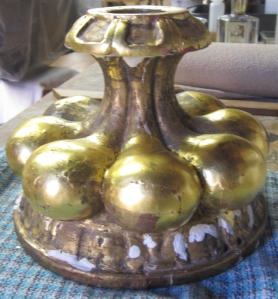 The rosette cornice before conservation.

The rosette cornice that sits flush to the ceiling now has a blended surface that Mr. Bucchi achieved using the existing gold lead which he dissolved and spread throughout the surface.  On top of this gold leaf is a varnish which matches the surface patination to that of the other gilded surfaces.  During conservation, Mr. Bucchi and I were able to determine that the chandelier has been wired at least two times from the age of existing wires.  The wires in the object were consistent with those used in the 1940s and 1950s, so they were not original, but the floral shades and availability of electricity around 1906 strongly indicate that the chandelier was originally electrified.  The flammable nature of the original silk fabric would not have withstood open flames from candles. 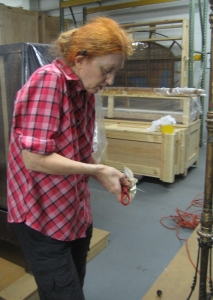 The City Museum’s Costumes & Textiles curator Phyllis Magidson and I formulated a plan to conserve the fabric components of the chandelier– notably the tassel and the wrap around its rod—and recreate the floral shades.  Conservator Valerie Boissot carefully cleaned the fabric parts and the work revealed brilliant gold strands interspersed with darker fabric strands.  One original floral shade that was installed with the chandelier when it entered the City Museum’s collection remained.  The shades that were on the piece when it was de-installed in 2012 were made in the 1980s and their loose shape and yellow color were not true to the original wire-framed, green shades.  Artist Chris Piazza used the fragile original shade to develop a color, fabric, and shape that best replicated the original while accommodating bulbs which emit far less heat and use much less electricity than the original incandescent bulbs.  The result of months of careful study, experimentation, and research can be seen in the Tiffany & Co. Foundation Gallery on the City Museum’s third floor: a completely conserved lighting device originally used in one of New York City’s grandest rooms and designed and manufactured by one of the leading New York City-based firms of the Gilded Age, the Edward F. Caldwell Company. Learn more about the exhibition here.