If you’ve never heard of Victoria Woodhull or her younger sister Tennessee “Tennie” Claflin, you’re not alone. When I first came across them in the Museum’s Portrait Archive, I was immediately intrigued by the designation of “Brokers” on their portraits. The more I researched them, the more interested I became.  They challenged the staunchly Victorian society of 1870’s New York City by opening the first female stock brokerage firm, were the first women to start a newspaper (one dedicated to radical reform, no less), and launched the first presidential campaign for a woman. Welcome to the strange and incredible true lives of Victoria Woodhull and Tennessee “Tennie” Claflin. 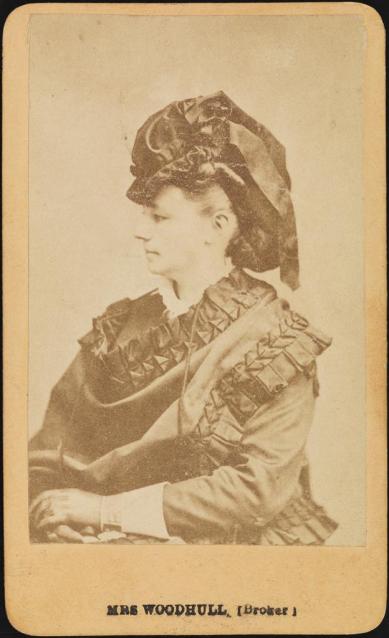 The sisters had less than auspicious beginnings. Victoria Woodhull (neé Claflin) was born in 1838 in the wilds of Ohio and Tennie was born six years later. Their father was a one-eyed snake oil salesman and their mother a religious fanatic. The girls were soon part of their father’s schemes, earning money as child mediums, healers, and clairvoyants at tent revivals. For much of their childhood they were nomadic, staying in towns long enough to sell medicines and messages from the beyond, leaving before they could be chased out of town.

For the next few decades, the sisters traveled difficult roads: bad marriages and a mentally handicapped child for Victoria, and the rough life of an itinerant faith healer for Tennie. And then one day, according to Victoria, the spirit of Demosthenes (the Greek orator, with whom she believed she communicated with regularly) sent her vision of a house on Great Jones Street in New York City where, the spirit promised her their lives would change for the better.

In 1868, the Claflin sisters invaded Manhattan. As promised, a house on Great Jones Street was procured and they immediately set to work taking over the city. Their first stop? Cornelius “Commodore” Vanderbilt because, well, when you want to get to the top you need allies, especially ones who possess one of the biggest fortunes in the country.

The sisters met the Commodore at just the right time. He had always been a superstitious man who trusted mediums more than medical doctors. At this time he was still deep in mourning for his beloved first wife. Thankfully, Victoria and Tennie could help with that. Victoria began hosting séances to give Vanderbilt business tips while Tennie focused on magnetic healing. She was apparently so gifted that she became Vanderbilt’s lover. It was serious enough to warrant pet names: he called her ”my little sparrow”; she called him ”the old goat.” There were rumors that he asked her to marry him, but alas it can’t be proven. It was this connection, however, (and Vanderbilt’s finances) that led to the sisters’ next big step.

On February 5, 1870 a large, boisterous crowd gathered outside 44 Broad Street to witness a first in New York’s history: two women opening their very own stock brokerage firm, with the silent backing of Vanderbilt’s fortunes. Woodhull, Claflin & Co. opened at 10 A.M. precisely and was promptly swarmed by men wanting to see how the fairer sex handled business. Newspapers were filled with eyewitness accounts of the first day of business. (See the amazing variety of articles this produced here). But for the most part, the papers championed the “Bewitching Brokers” and “The Lady Bankers,” while calling attention to the regal beauty of Victoria and the feisty flirtiness of Tennie. With their studied social rebellions, short hair, and dresses short enough to show their boots, the sisters were treated as novelties by the press. However novel they were, they were also a success – they supposedly made $700,000 the first six weeks they were in business (a hefty $13 million in today’s dollars).

Miss Tennessee Claflin Receiving Orders for Stock Speculation, 1870. Reprinted in One Moral Standard for All: Extracts from the lives of Victoria Clafin Woodhull and Tennessee Clafin. Museum of the City of New York. F2011.16.7.

The press and public clamored for stories (positive and negative) about the nonconformist sisters, so for years they were never far from the headlines  and that suited them just fine…even when they were subjects of political cartoons like this.

From the New York Evening Telegraph, February 18th, 1870. Reprinted in One Moral Standard for All: Extracts from the lives of Victoria Clafin Woodhull and Tennessee Clafin. Museum of the City of New York. F2011.16.7.

Keep in mind that this happened in the height of the Gilded Age, when a woman didn’t have a voice, property, or money independent of the men in her life, whether it was her husband, brother, or father. Thanks to a private door in the rear of the building leading to a women-only lounge, Woodhull, Claflin & Co. made it acceptable for women ranging from elite society dowagers to actresses to take control of their money. Most people would be content with this success, but the sisters weren’t satisfied; they had bigger plans. As Victoria later said: “We went unto Wall Street, not particularly because I wanted to be a broker…but because I wanted to plant the Flag of women’s rebellion in the center of the continent.”

Using the profits from Woodhull, Claflin & Co., they started their own weekly newspaper, the not so creatively named Woodhull & Claflin’s Weekly. It’s within these pages that we can see how modern their ideas were, and still are: sexual education for teenagers, eight hour workdays, fair wages, and gender equality are issues still being argued 144 years later!

Alll of this was a mere stepping stone for their next move. Stay tuned for the continuation of the saga of Victoria Woodhull and Tennie Claflin.