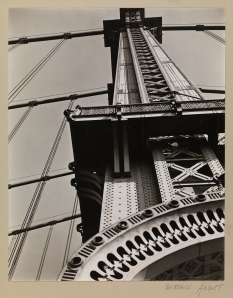 Thursday, July 17th, is the 116th anniversary of Berenice Abbott’s birth (1898-1991).  The Museum of the City of New York holds over 2500 works in the collection by Abbott, who grew up in Ohio and lived briefly in New York’s Greenwich Village before moving to Europe in the 1920s, where she developed her photography skills.  Abbott returned to New York City in 1929, and after several attempts to obtain funding, was eventually hired by the Federal Arts Project (FAP) to execute what came to be known as “Changing New York,” a photo-documentary series of 305 images of the changing urban landscape of New York City.  You can read more about this project in an earlier post – Berenice Abbott and Elizabeth McCausland’s “Changing New York.”

In the three years since the Museum has launched this blog, numerous posts have drawn on Abbott’s work to narrate the city’s history.

Abbott’s scope was wide, and she traveled to all five boroughs, capturing locations such as Astoria, Queens; Bath Beach, Brooklyn; Shore Acres, Staten Island; Westchester Square, the Bronx; and multiple locations in Manhattan.  Take a a quick moment to peek around on Google Maps, and you’ll see that none of these structures below exist anymore. The house in Astoria and the Belvedere Restaurant (located at Bay 16th and Cropsey Avenue, Brooklyn) were replaced with apartment buildings that appear to have been built within a decade of the photographs. The existing house on Hope Avenue in Staten Island may still have the same rock wall around the property, but it’s difficult to say for sure. 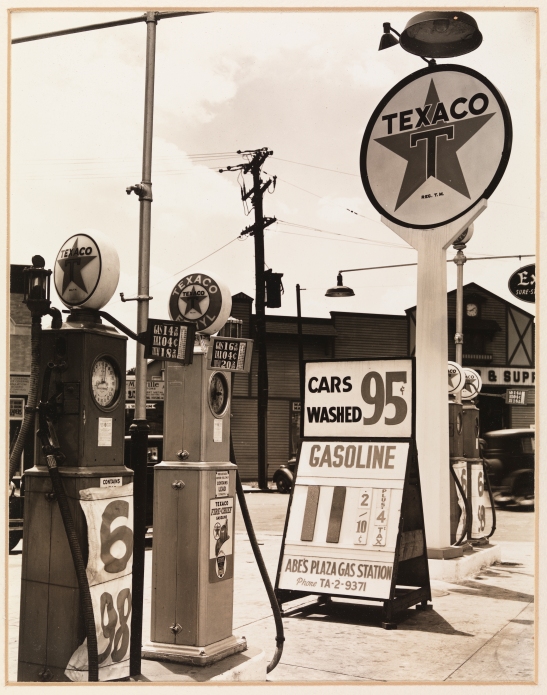 As for the Gas Station in the Bronx – Dock Street and East Tremont Avenue don’t even intersect up anymore – Herman H. Lehman High School now sits on the site, though the station may have been demolished as early as the 1930s or 1940s to make way for construction of the nearby Hutchinson River Parkway. 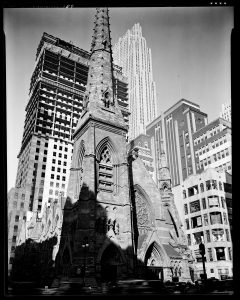 We could fill this post with an endless stream of images Abbott took of businesses, buildings, and landmarks that no longer exist; or some, such as Rockefeller Center, to the left, that were just in the early stages of construction, and remain as icons today.   As we honor the birth week of the photographer who had the foresight to capture the city as such a pivotal point in its history, take a look at her other images online, and see what lost fragments of the city’s urban landscape you can identify.