Theatre is a space that grants opportunity for collaboration, inviting artists of different medias to join together to create something much larger than themselves. It is an opportunity to take an any idea–a fantasy, an historical moment, or a work of literature–and breathe life into it on a new scale. Costume design is integral to this transcendence. Whether glamorous or realistic, the craftsmanship and vision that goes into each garment transports the body of the actor into an alternate realm. The Art Deco movement exemplifies the crossover of the traditional role of the artist. Practitioners were not relegated to one medium: they designed sets and costumes, wrote scripts, and at times acted in the same production. We highlighted fashion in last week’s post – Mod Women: New York Fashion of the 1960s (if you haven’t yet voted for our project to digitize this collection, please do so here!); this week we will look at theater costumes.  At the Museum of the City of New York, we are fortunate enough to have many rare documents related to productions with costumes of spectacular artistry. Please enjoy the following selection:

In high Art Deco style, George Barbier’s scenery and costumes for Broadway Nights depict a playfulness and stylization of urban culture in the 1920s. Barbier is also known as one of the premier fashion illustrators of his time, whose lavishly colored haute-couture fashion plates defined the movement. 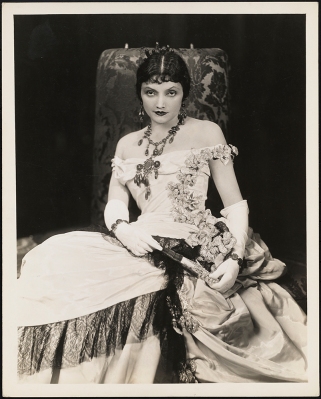 In The Age of Innocence Barbier teamed with Worth of Paris to create Katherine Cornell’s sumptuous gowns. (See more Worth gowns in our online exhibition Worth & Mainbocher: Demystifying the Haute Couture.) 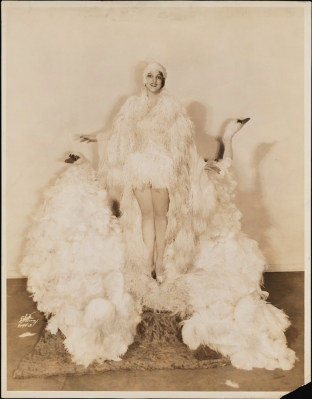 Barbier was famous for joining with designer Erté (Romain de Tirtoff) on some of the most memorable costumes of the 1920s (notably for the Ziegfeld Follies). The above piece depicts showgirl Beth Dodge (of the Dodge Twins) in one of her signature feathered numbers. The Twins were known as “The Two Birds of Paradise”– they literally dressed as birds while crooning with their nightingale voices.  Like Barbier, Erté was also a renowned illustrator, designing over 200 covers for Harper’s Bazaar. 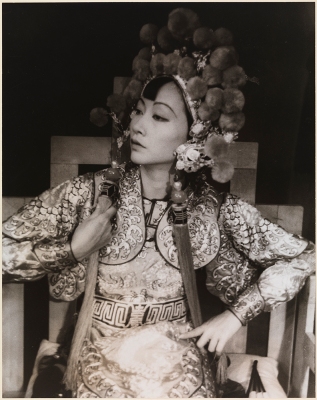 The above image depicts screen goddess Anna Mae Wong in costume (designer unknown) as the princess Turandot, in the dramatic adaptation of Puccini’s Opera Turandot, Princess of China: A Chinoiserie in Three Acts. 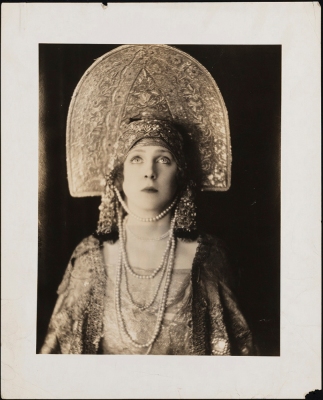 Visionary artist Norman Bel Geddes designed these costumes from the The Miracle. Bel Geddes also designed the scenery, which replicated a Cathedral and featured burning incense (original sketches were recently on exhibit in the Museum of the City of New York’s exhibition Norman Bel Geddes: I Have Seen the Future). The Miracle was written by Max Reinhardt, who was a leading pioneer in the German Expressionist movement. The play was co-written by Karl Gustav Vollmöller, who also wrote the film Blue Angel (which launched Marlene Deitrich’s career). Diana, Viscountess Norwich, who played the statue Madonna, was one of the more famous socialites of her time, running in avant-garde circles with the “Lost Generation.”

Ensembles designed by Kiviette for The Band Wagon depict the variety of pieces worn during during the golden age of the Broadway revue. The Band Wagon was considered the greatest examples of this style of show. It was the very last time Fred Astaire performed with his sister Adele on stage before she retired to marry Lord Charles Cavendish. Tilly Losch (Ottilie Ethel Leopoldine Herbert, Countess of Carnarvon) was also a collaborator with Max Reinhardt, who cast her in the London production of The Miracle. She enjoyed a long career as a dancer, choreographer, actress, and painter.

Nickolas Muray. [Dorothy Arnold as the Duchesse in the ballet ‘Nighingale and the Rose’, Greenwich Village Follies.] 1922. Museum of the City of New York. 82.102.1

The gown above was designed by James Reynolds for Dinarzade for the part of the Duchesse in a Follies ballet based on the Oscar Wilde poem, “The Nightingale and the Rose.”  “It was sea-green net with a scarf of lilac taffeta and garland of flowers in various shades of pink and mauve, jewels of emerald, diamonds and pearls.” Although not visible here, it is of note that Reginald Marsh painted the backdrops for the production.

Cinema idol Mae West wrote and starred in Catherine Was Great. She is shown here in a piece designed by Mary Percy Schenck and Ernest Schrapps at the Sam S. Shubert Theatre.

Above, actress Eva Le Gallienne in menswear designed by Aline Bernstein for her famous title role “L’Aiglon.” Bernstein was a renowned costumer who went on to establish The Costume Institute (now housed at the Metropolitan Museum of Art). Eva Le Gallienne was known as much for her love life as her professional career, having open affairs with prominent female actresses of her time.

The Music Box Revue featured costume designs by Ralph Mulligan and Adrian (and music by Irving Berlin). Ruth Page (left) became a legend in the world of choreography and ballet. 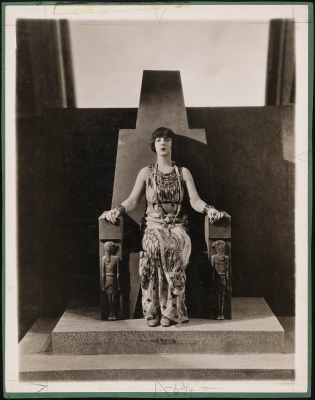 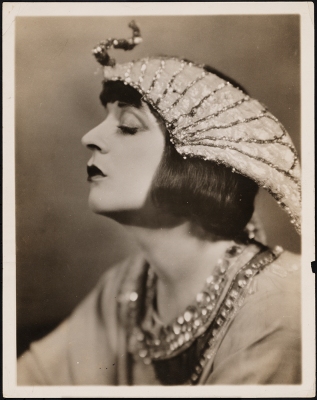 If you enjoyed these fashion images, check out last week’s post  Mod Women: New York Fashion of the 1960s, and don’t forget to vote for MCNY’s project here! As always, we are grateful to the Institute of Museum and Library Services for their generous support of the City Museum’s project to digitize our Broadway production photographs, without which these fabulous images would have remained hidden.