On many days, you can spot archaeologists working alongside construction workers in New York City. They help ensure that important evidence of New York City’s past is not overlooked as the City grows and changes. After excavations are finished, the artifacts unearthed need to be stored and cared for either in an archaeological repository, a university, or a museum. Over the past 40 years, the City has accumulated hundreds of thousands of artifacts. The City Museum has just embarked on a partnership with the LPC that  will make sure they are cataloged, photographed, and ready to share with the public online and at LPC’s new archaeological repository. 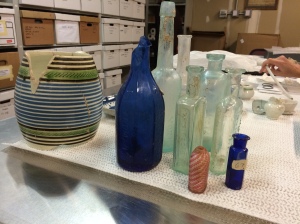 Because of New York City’s lengthy and dense occupation, archaeologists find a wide range of ceramics, glass, nails, shell, and animal bone. These artifacts relate to all economic classes and have often been imported from all over the world. City Museum archaeologists have already cataloged ceramics dating from the 17th, 18th, and 19th centuries in just the first few boxes!

In late 1979, construction was about to commence on Broad Street in Lower Manhattan and a group of archaeologists petitioned for the opportunity to excavate this area. Thanks to their efforts, the Stadt Huys block project uncovered New York’s first City Hall and some of the best evidence of 17th and 18th century New York City life. Since then, the city has required excavation on all city-owned property before development, as part of the environmental review process, resulting in archaeological collections from across the five boroughs.

The City Museum has begun to catalog and digitally photograph these collections, with the eventual goal of launching a unified online public database that will provide access to researchers, archeologists, scholars, educators, museum curators, and the public. The project will help set standards for the long term preservation and care of these collections and eventually bring them together in one searchable database that will provide online access as new finds are uncovered in the future.

In addition to cataloging the collections, the City museum plans to incorporate archaeological objects into adult and children’s programming and display new “discoveries” as they are cataloged by museum staff.

Stay tuned for posts on what we discover as work progresses!