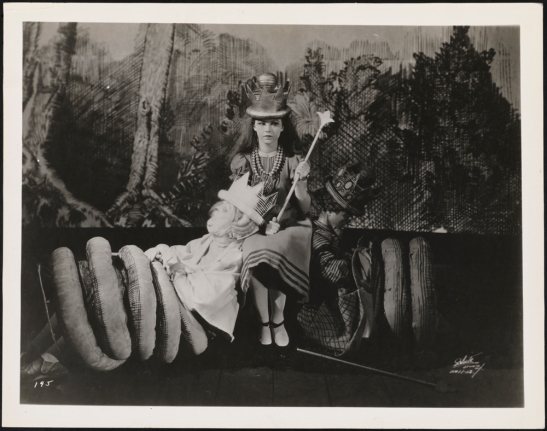 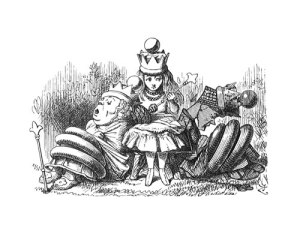 Actress, producer, and director Eva Le Gallienne built a reputation for taking classic works of literature and bringing them to life in the theater. In her 1932 production of Lewis Carroll’s Alice’s Adventures in Wonderland, this was applied in extraordinary proportions (quite literally). Because Alice was such a beloved childhood staple, Le Gallienne decided upon a visual interpretation that literally translated the original illustrations by Sir John Tenniel. The script, written with Florida Freibus, was adapted faithfully from text. The resulting product had a magical effect, as if the engravings had been conjured to life. Alice’s costumes and sets shifted seamlessly together, creating a world where drawings moved across the pages of a book on their own. 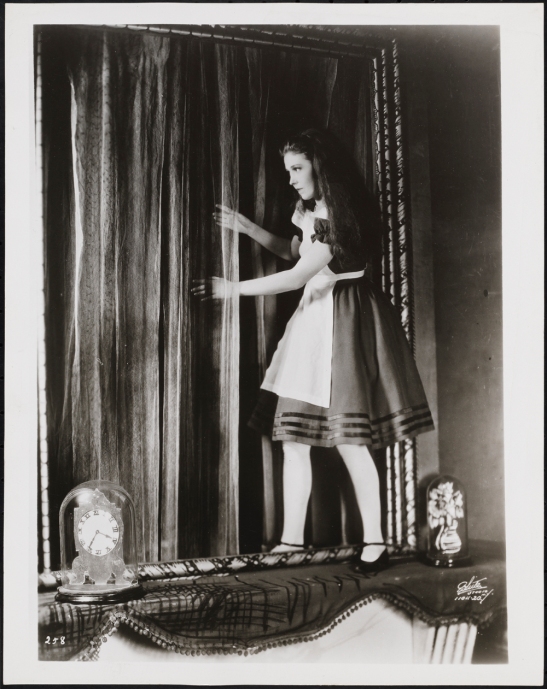 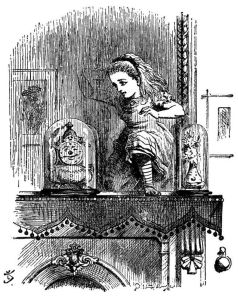 Sir John Tenniel. Alice Pushes through the Mirror. Illustration for Lewis Carroll’s Through the Looking Glass. 1865.

Between 1932-1933 there were 127 performances at Le Galliene’s own Civic Repertory  Theatre. It became her most personally cherished piece, and was revived in 1947 and again upon its 50 year anniversary in 1982 with an 84-year old Eva playing The White Queen. 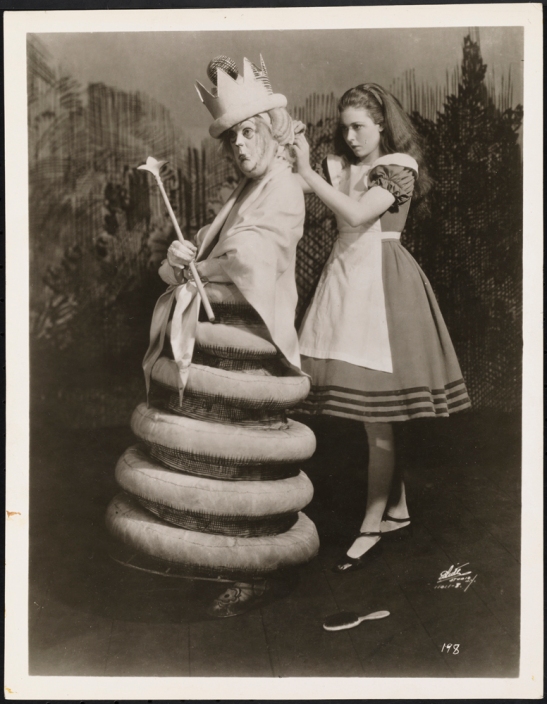 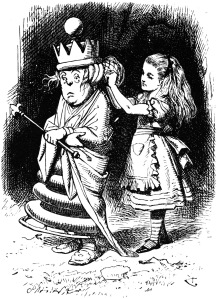 Le Gallienne was a genius at scouting fresh talent for collaborators, and this production was no exception. In 1931 she commissioned fashion illustrator Irene Scharaff as costume and set designer. Irene Scharaff’s brilliance is strikingly apparent in this first effort on the stage (later she would go on to win five Academy Awards as costume designer for such famous productions as Cleopatra, West Side Story, and Funny Girl.) Together Le Galliene and Scharaff engineered a moving background 400 yards long that unwound throughout the production on two giant rolling drums. Moving platforms also operated in the front. Cut-out spaces allowed the actors and marionettes to move in time, weaving in and out of the scenery. The original 1932 production was operated entirely by man-power; the 1982 revival utilized machines. 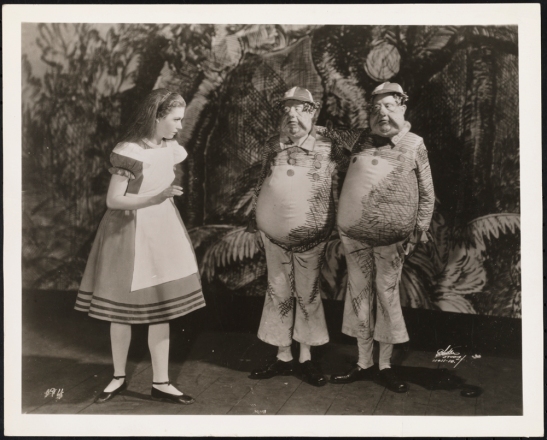 White Studio (New York, N.Y.). [Josephine Hutchinson as Alice, Burgess Meredith as Tweedledee, and Landon Herrick as Tweedledum in “Alice in Wonderland”.]. 1932. Museum of the City of New York. 37.350.27. 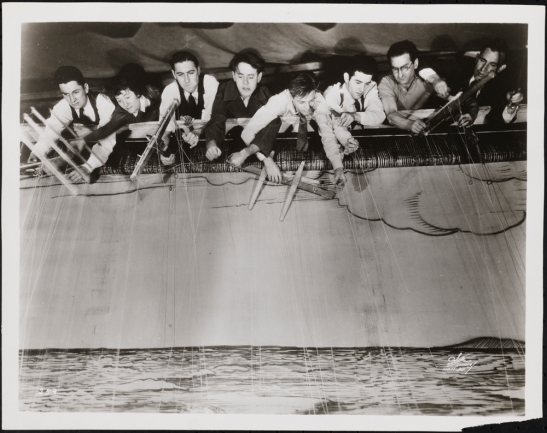 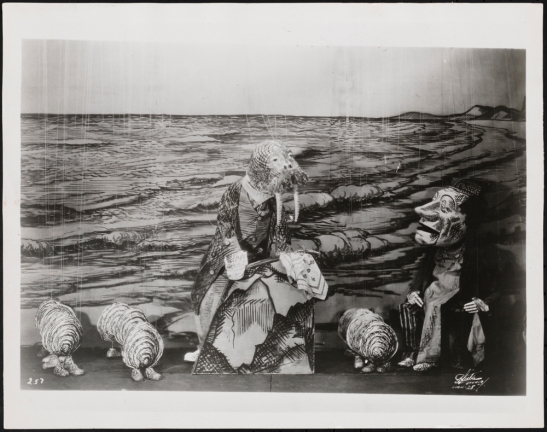 Sharaff collaborated with master marionette maker Remo Bufano to devise costumes, sculptural masks, and puppets. Masks made from papier maché strove to replicate the exact crosshatching line work of the Tenniel illustrations, creating the one-dimensional appearance of a paper collage. The colors were largely restricted to black and white to match the backdrop, adding red, green, and yellow highlights selectively. The proportions of the characters were painstakingly replicated for each scene, evolving with the growing and shrinking of Alice throughout the story. For some characters, up to three actors of various statures were hired. 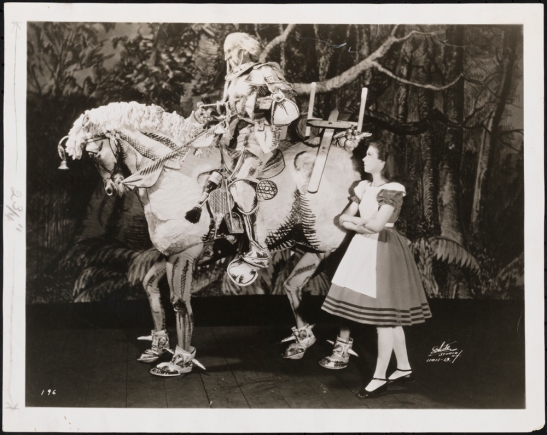 Eva Le Gallienne performed the White Queen, a role that required one of the more complicated and cumbersome costumes in the entire production. The heavy costume consisted of numerous balloon tires of descending size. If this was not enough, she also was strapped to a harness in order to fly over the audience in acrobatic scenes (children would reach up to brush their hands against her in awe). Later in her memoir she attributed the success of her role as The White Queen to her mentors, the Frattelini clowns who took her under their wings when she briefly joined the circus as a young woman in France. 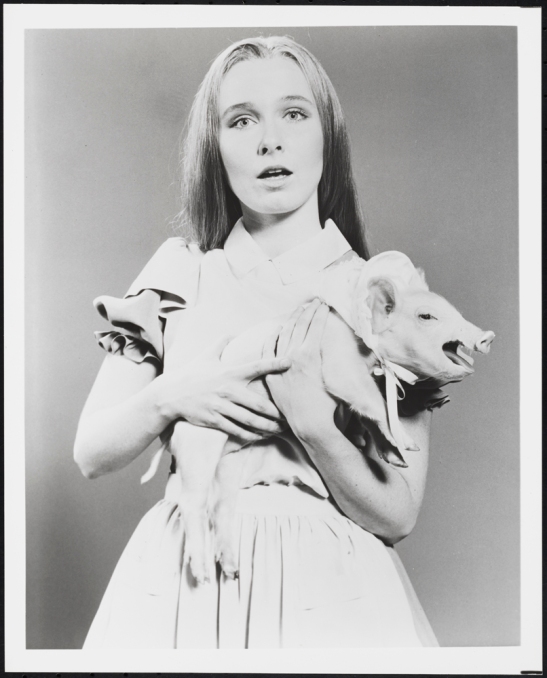 In 1982 Le Gallienne returned to her role for the 1982 revival, just one month before her 84th birthday. The cost to bring Alice back to the stage was much higher in the 1980s, costing an exorbitant $2 million, as opposed to $2,000 in 1932.  Le Galliene is quoted in a New York Times article: ” ‘Alice’ was one of the things I was most proud of,” she said. ”The production was ahead of its time and I don’t think it dates at all. Classics don’t date.” Though scenery and costumes were again celebrated, unfortunately the acting fell flat, garnering negative reviews that lead to an early closing after just 22 performances. It would be Le Gallienne’s last appearance on stage.

These theater photographs were digitized with the generous support of the Institute for Museum and Library Services. Visit the Museum’s online Collections Portal to see more.

This entry was posted on October 14, 2014 by Lissa Rivera in Theater Collection.