Imagine this scenario: The year is 1800. You’re the President of the United States. You need to transmit an urgent message to a diplomat living 3,000 miles across the ocean, but the information has to remain secret – it cannot fall into anyone else’s hands. What do you do?

Thomas Jefferson found himself in just this situation soon after taking office in 1801. He did not have NSA supercomputers to create unbreakable encryptions; there were no covert satellites to ping top-secret communications around the globe. All Jefferson had was a pen, paper, and an enthusiasm for solving problems on his own. 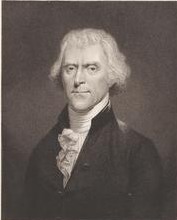 In conjunction with this year’s 25th Anniversary History Day celebration, the Museum of the City of New York will exhibit a series of eight rarely seen letters written by Thomas Jefferson to Robert R, Livingston, a New York lawyer and Jefferson’s choice as “Minister Plenipotentiary” to France.

In this remarkable correspondence, Jefferson and Livingston laid out a foreign policy that defined the direction – indeed even the very shape – of the emerging United States.  For virtually all of Livingston’s tenure in France, Europe reeled and stumbled from one devastating conflict to the next. As phenom French general Napoleon Bonaparte rampaged across the Continent, Jefferson and Livingston desperately worked to keep their young and still relatively weak nation from becoming entangled in Europe’s battles. Still recovering from the Revolution, America simply didn’t have the strength or power to get involved.

At the same time, shifting balances of power in Europe could also provide some incredible opportunities. Napoleon’s ceaseless need for extra cash to fund his armies – combined with France’s loss of the sugar island of Haiti to a slave rebellion – convinced the French to part with 828,000 square miles of the Louisiana Territory. The Louisiana Purchase, authorized by Jefferson and negotiated by Livingston, was the largest single land acquisition in American history, encompassing a massive swath of ground from Texas to Montana that would ultimately make up all or part of 15 new states. 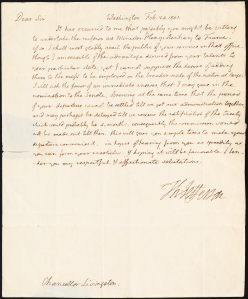 Thomas Jefferson to Robert R. Livingston, February 24, 1801
Museum of the City of New York, 47.173.252
In this letter Jefferson asks Livingston to serve as “Minister Plenipotentiary” – or Chief Diplomat – to France

But for all their grand historical importance, the most fascinating moment in these documents was not about politics. It was about cryptology. Jefferson knew that he was dealing with challenges and opportunities that would affect the United States for generations to come. He also knew that the information he shared was extremely sensitive and could seriously injure American interests if it fell into the wrong hands.

Jefferson’s solution was a cipher – a special method for scrambling the order of letters in a message that made the document completely unintelligible to anyone who happened to find (or steal) it. Once encrypted, a secret communication might look something like this:

Extract of Letter from Thomas Jefferson to Robert R. Livingston, undated
Museum of the City of New York, 47.173.268B

In order to unlock the code and reconstruct the original message, the recipient needed two 27-digit keys.  Like email passwords today, each key had to be unique and complicated. It also had to be something that both men could remember easily without writing down on paper, because if anyone got a hold of both the message and the key, the whole encryption would be worthless.

Letter from Thomas Jefferson to Robert R. Livingston, April 18, 1802
Museum of the City of New York, 47.173.260
Jefferson proposes a cipher for secret communications

So Jefferson decided to devise a set of keys that was completely original and that either correspondent could recreate at any point he chose. He began by spelling out Livingston’s full name and the full name of Livingston’s home in upstate New York. Together, the whole thing happened to total exactly 27 letters:

Then he divided the 27 letters into three groups of 9:

He re-arranged the letters within each group of 9 into alphabetical order and assigned each a single digit number:

Fortunately Jefferson’s full name and residence also happened to contain 27 letters, and could be treated the same way:

Thus each correspondent could reconstruct both original key-codes at any time, without ever needing to write them down permanently.

This moment – Jefferson’s personal explanation of a cipher system – captures the two central themes that make this collection of correspondence truly special. First, to put it frankly, the content of the letters is profoundly important in historical terms. The documents provide a rare, first-hand look into the behind-the-scenes thinking of two men charged with making some of the most meaningful decisions affecting the course of our nation’s early history.  Jefferson knew he was dealing with questions of the utmost national significance. Why else would he prepare a special method for speaking in code?

At the same time, these documents also tell us something powerful about Jefferson himself. Here we have the President of the United States – a man with no shortage of other responsibilities – taking the time to work out his own system for encrypting messages. Why not let somebody else do it?

We hope that students participating in the 25th Annual History Day Competition here at the Museum of the City of New York will be inspired by Thomas Jefferson’s example. We hope they will apply their own energy and enthusiasm to solve the problems that interest them. After all, the first qualification for any good historian is simple: you just have to be curious.