This week, we have a guest post from one of our Collections interns, Emily Arbuckle.  Emily is completing her Masters Degree in Information and Library Science and Archives Certificate at Pratt Institute, and just finished reprocessing the Museum’s World Wars I & II collection as part of our NEH funded ephemera project.

Over the past 15 years New Yorkers have come together in times of hardship, in the aftermaths of 9/11 and Hurricane Sandy. New Yorkers also banded together for the greater good during World Wars I and II, as evidenced by the materials in the Museum of the City of New York’s ephemera collections. The following selections from the Collection on World War I and World War II is a sampling of materials documenting the myriad of volunteer opportunities available to New Yorkers during these periods of international turmoil.

In response to World War I women began to take on new responsibilities in the war effort. The Motor Corps of America provided the opportunity for women to learn to drive and maintain vehicles. Here we see buttons and signage from a New York City Motor Corps volunteer named Dorothea Harnecker, donated to the City Museum by her daughter Mrs. Beatrice Stone. 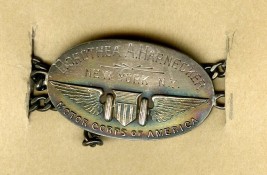 The Motor Corps of America was a volunteer  effort established by the National League of Women’s Services and the Red Cross. The organization provided transportation and ambulatory services to military personnel. The Motor Corps was one of the most demanding divisions of the league and required a chauffeur’s license, mechanic’s license, and many hours of training.

Motor Corps of America, Dorothea Harnecker-Momsen, 1917, in the Collection on World War I and World War II. Museum of the City of New York. 2003.89.2.

Red Cross, U.S. Army Muffler, 1943, in the Collection on World War I and World War II. Museum of the City of New York.

Not all volunteer opportunities required such a high level of technical skills.  One way people of all ages helped the war effort was by knitting wool goods for service men overseas. During this time period knitting was a more common skill for an American to possess, and an easy way to volunteer one’s time. The Red Cross distributed patterns for clothing such as socks, mufflers, sweaters, and wristlets. Here is a pattern from 1943 for a U.S. Army muffler. Knitting circles using these patterns could be found in schools, churches, and homes all over New York City during the first and second World Wars.

In 1940, Mrs. Natalie Wales Latham founded one of these knitting circles in New York City as a World War II relief campaign called “Bundles for Britain,” an organization advertised on the pencil below.  Mrs. Latham began the organization by knitting wool goods for British sailors with a small group of women.  “Bundles for Britain” eventually grew to 1,900 chapters across the United States and began shipping out other items needed by the British troops such as medical supplies and ambulances.

Bundles for Britain, in the Collection on World War I and World War II. Museum of the City of New York.

During World War I the United States recommended reduced consumption of food in order to send more overseas and avoid mandatory rationing at home. Many Americans responded by cutting back on meat, wheat, sugar, and other critical foods. The Lawyers Club of the City of New York responded to the problem by funding a farm in the city called Club War Farms, Inc. This poster from 1917 invites recipients to a Harvest Festival Dinner Dance just after Thanksgiving to celebrate the harvest. 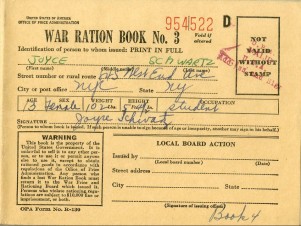 Food shortages in the United States were even more pronounced during World War II, and mandated food rationing was unavoidable. Each American received a book of stamps, with particular stamps for each category of  rationed food, such as meat or canned goods. One could not buy the rationed food without providing a stamp. This ensured that food was distributed evenly throughout the country. Above is an example of one of the ration books in the museum’s collection.

Along with the shortage of food during World War II, New York City was also experiencing a shortage of workers. Men were being sent overseas and New York was considered a prime target of attack, necessitating extra protection at home. In 1942 City Patrol Corps was founded as a reserves police force.This handout urges New York citizens to join the City Patrol Corps in manning the additional posts during wartime as well as protecting New York citizens from “additional menaces.” 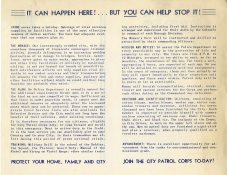 Front Line of City Defense from the City Patrol Corps, in the Collection on World War I and World War II. Museum of the City of New York.

These items and more are being digitized as part of a National Endowment for the Humanities grant, and you will be able to view this collection and many others in the online Collections Portal in the coming months. Continue to check this blog for more selections from the ephemera archives as the Museum of the City of New York continues with the digitization project.  In the meantime, please check out at the finding aid for the Collection on World War I and II.

This entry was posted on February 3, 2015 by Collections Intern in Digital Project, Manuscripts and Ephemera and tagged Bundles for Britain, City Patrol Corps, Club War Farms, Ephemera, Motor Corps of America, National Endowment for the Humanities, Red Cross, The Lawyers Club of the City of New York, World War I, World War II.