The Tempest: storms, schemes, and a happy end

On May 27th The Tempest opens the Public Theatre’s annual Shakespeare in the Park season at Central Park’s Delacorte Theatre. Refresh your memory of the plot details as we explore images of various productions of the play in the City Museum’s Theater collection.

The King of Naples is sailing home from the wedding of his daughter. With him are his son Ferdinand, his brother Sebastian, Antonio (the current Duke of Milan), and various members of the king’s household. All of a sudden, a storm appears as if from nowhere. Terrified by the gale, the king’s company plunges into the sea. Everyone makes it safely to a nearby island, but the group is split up. Ferdinand is separated from this father the king and isolated on a different part of the island. So with thunder and flashing lightning begins William Shakespeare’s final play, The Tempest.

The opening clamor, the audience soon learns, is the creation of Ariel, a spirit under the control of Prospero. Formerly the Duke of Milan, Prospero’s position was usurped by his brother Antonio, and he found himself exiled on this magical island twelve years ago with his only child, a daughter named Miranda.  Having rescued Ariel from the malicious witch who previously inhabited the island, Prospero commands the spirit with the promise of eventual freedom. Before Ariel can be released (and the play can end), all must be set aright in restoring Prospero and his daughter to Neapolitan society.  A great part of Prospero’s plans for restoration involve Miranda and the lonely Ferdinand falling in love. To that end Ariel leads the young man into a seemingly chance encounter with Miranda. 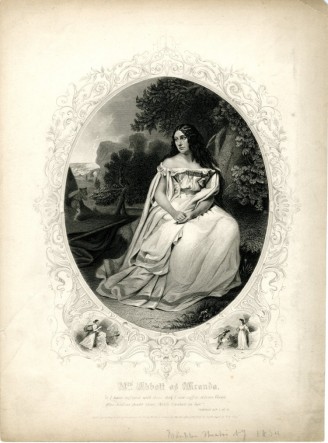 Familiar only with her father and Caliban (a native of the island and the only other inhabitant), Miranda quickly becomes infatuated with Ferdinand. Prospero is somewhat concerned with how fast the two fall in love. He wonders if “too light winning make the prize light” and places himself as an obstacle to strengthen their passion. 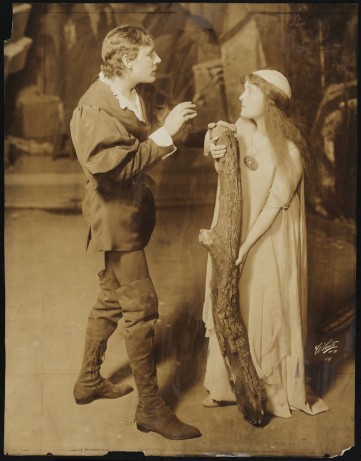 Elsewhere on the island, the King of Naples is concerned about finding his son. With him are his brother Sebastian and Prospero’s traitorous brother Antonio. The deceitful Antonio works to convince Sebastian to overthrow the King in the same fashion he betrayed Prospero. Using the spirits of the island, Prospero conjures a banquet of ghosts to frighten the company and reveal their sins against him and each other.

As comic relief to weave through the love story and plots of betrayal, Shakespeare created the characters of Trinculo, the King’s jester, and Stefano, the King’s steward. They are drunkards and cope with their new status as castaways with an ample supply of wine.

The two encounter Caliban, the son of the island’s original witch and its only native. Caliban is described as a monster. He has been enslaved by Prospero and abhors the magician’s presence on his island. Mistaking Trinculo and Stefano for deities, Caliban convinces them to join him in a revolt against Prospero. A lot of drinking is involved. 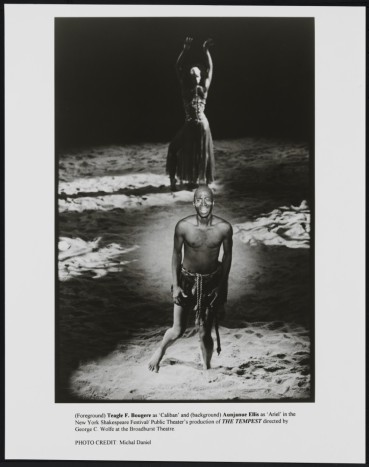 The first recorded performance of the The Tempest took place in 1611, just five years before Shakespeare’s death. Though not immediately popular, the play gained momentum as time passed. In 19th century American performance, much attention and care went into creating the more spectacular elements, such as the opening storm and Ariel’s magic spells. Broadway’s longest running production was staged by Margaret Webster and starred Arnold Moss as Prospero, the dancer Vera Zorina as Ariel, and Canada Lee as Caliban. Webster’s production ran a total of 124 performances on Broadway in 1945.  In a New York Times article published soon after opening night, Webster notes a significant theme for her production is the “search for freedom…shadowed with the penetrating implication that freedom often turns out to be different from what we had imagined, involving responsibility and not merely license.” Webster explored this through the relationship between Prospero and Caliban. Canada Lee was the one of the first prominent African American actors to take on the role of the enslaved island native.

In the end, the schemes of Antonio and Sebastian and the revolt of Caliban, Stefano, and Trinculo all come to naught.  It is Prospero’s island, and only his plots are realized. Alonso is reunited with his son. Ferdinand will marry Miranda. Sebastian abandons his plot to overthrow his brother, and Antonio is forgiven his. The drunken trio is punished with minor, temporary physical discomfort but no lasting consequences, and Ariel is freed.  Prospero will return home, asking the audience directly for “the help of your good hands” to make wind for his sails. So ends The Tempest, with thunderous applause. 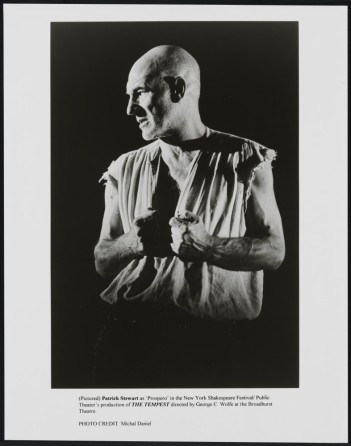 For a complete schedule of free, outdoor Shakespeare offerings this summer, check out the New York City Parks website. And if, perchance, a storm should come up suddenly whilst you wait for tickets or enjoy a matinee, I know a good museum that is open till 6PM every day of the week.

One comment on “The Tempest: storms, schemes, and a happy end”

This entry was posted on May 26, 2015 by Morgen Stevens-Garmon in Theater Collection and tagged Actors, Broadway, parks, Plays, Theater, William Shakespeare.