Capricious, evanescent, outrageous: there has always been something to parody about fashion. It has had its moments of sanity, where form has actually nodded to function, but centuries-worth of acrid illustration captures its erratic permutations. Political satirists throughout the 18th and 19th centuries frequently targeted fashion’s absurdities – ballooning sleeves, wasp-like waists, meandering hemlines – as tantalizing subject matter for ridicule.

A deliciously obvious phenomenon was fashion’s “Grecian Bend” of 1868, itself a caricature with its forward-hunching posture (paraphrasing that of a tyrannosaurus) caused while attempting to counter-balance the backward thrust of an outrageously pronounced bustle and weighty mounded coiffure – made all-the-more comical while tottering along on the day’s tiny high-heeled shoes and balancing a miniature sunshade from tightly gloved hands. The conspicuous presence of the “Grecian Bend” along the main corridors of New York City’s fashionable shopping district (subsequently known as “The Ladies’ Mile,” and featured in the City Museum’s exhibition Gilded New York) prompted Thomas Worth’s sketch for lithographers Currier & Ives, typically known for their picturesque landscapes and sentimental visions of Americana. Their widely distributed “The Grecian Bend, Fifth Avenue Style” constituted a satirical sidebar for the firm, becoming the best known of their fashion commentaries.

The absurdity of the print’s imagery resonated throughout the day’s popular culture, inspiring the mocking lyrics of W.H. Lingard’s “The Grecian Bend” sheet music, published that same year in New York:

The ladies wanting something new,
As women are so prone to do,
Wear lofty heels upon the shoe
To give them a Grecian bend.
With foot so short, and heel so high,
They can’t stand plumb if they would try,
And so they think to catch the eye
By means of a Grecian bend.

Chorus
Oh, see them promenade Broadway,
From early morn till end of day,
To hear what dashing gents will say
About the Grecian bend

The misguided fashion victim’s dilemma was caused by bustles and corsets comparable to those depicted to the right, combining under a cumbersome silk gown to present the wearer with a no-win navigational scenario.

In 1890, scarcely more than twenty years later, the debut of Charles Dana Gibson’s American Girl heralded a departure from the exploitation of women as fashion victim fodder for journalistic amusement. A product of New York’s Art Students’ League, with technical polish gleaned from European masters, Gibson’s precise, lyrical illustrations introduced a new breed of American female: intelligent, outspoken, and equally beguiling in ball gown or innovative masculine-derived attire. Her look and personae popularized, through serialized captioned vignettes that appeared in such weeklies as Life, Scribner’s, Harper’s and Colliers, the craze for the “Gibson Girl” look and inspired many a feminine traditionalist to experiment with her husband’s, beau’s, or male sibling’s wardrobe. 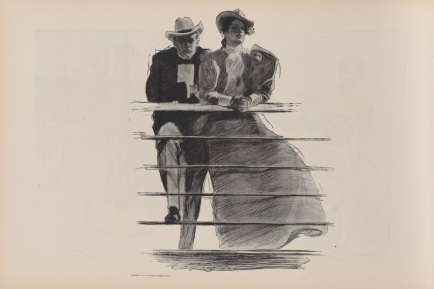 The power of Gibson’s drawings relied on a novel formula that combined visually explicit scenario with wry captioned commentary. Without her uttering a single word, the illustrator conveyed a seemingly endless procession of his creation’s charades as she challenged and invariably bested men at their own game. But beyond her statuesque beauty, Gibson’s free-thinking heroine was an iconoclastic dresser, purloining historically male garments and neutralizing their gender-specific associations. Crisply tailored suits and coats, nautical ensembles, starched-collar shirtwaist blouses worn with silk neck ties, insolent fedoras and straw boaters – all male derivatives that had yet to cross over into the female dress vocabulary – until she commandeered them. In turn, the Gibson Girl’s celebrity endorsement lead to the mainstreaming and assimilation of this new look for the general public.

Her First Appearance In this Costume (she thinks, on the whole, she feels more at home in a ball dress), copyright 1899, Life publishing company 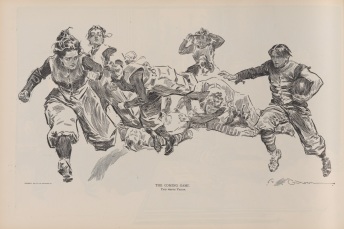 A sturdy man-tailored bicycling ensemble from the permanent collection (below) echoes the masculine yet feminine look embraced by women for sporting purposes. This form-follows-function approach to clothing initially used for athletic pursuits would become an enduring component and eventually come to define the flavor of American fashion for the balance of the 20th century. 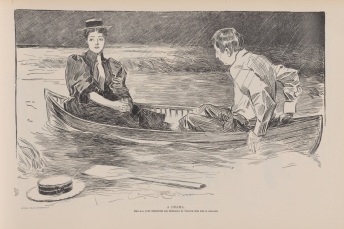 The Drama (she has just prevented his proposing by telling him she is engaged)
Copyright 1895, Life publishing company 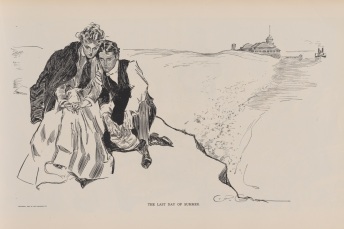 The Last Day of Summer
Copyright 1894, Life publishing company
In this illustration not only has Gibson’s girl declared ownership of a man-tailored shirt and tie, she has even stolen her escort’s jacket.

Above illustrations reproduced from “The Gibson Book,” Gift of Miss Mary Whitney Bangs, 43.166.15a

Postscript: The years immediately prior to and following WWI ushered in an era of women’s activism, directly impacting and radically altering the formula for dress as a small reflection of the larger issue of feminine enfranchisement. Rollin Kirby’s “The End of the Climb” announces the 1920 ratification of the 19th Amendment, finally awarding women the right to vote. Fashion satire? He depicts a woman who has declared her independence, decidedly anti-fashion and disheveled, focusing on the bigger picture rather than such trivial things as dress.

3 comments on “Pilfering the Male Wardrobe: The Gibson Girl’s Retort to Fashion Satire”