What is it I associate so keenly with the summer smell and sensual keenness of Prospect Park? – Alfred Kazin[1]

The construction of Central Park prompted the city of Brooklyn to raise funds and political support for a park of its own. This effort was led by municipal official James S. T. Stranahan, who argued that such a park “would become a favorite resort for all classes of our community, enabling thousands to enjoy pure air, with healthful exercise, at all seasons of the year…”[2]

Prospect Park takes its name from Brooklyn’s second highest point, Mount Prospect, at the intersection of Eastern Parkway and Flatbush Avenue. The original site plan for the park included Mount Prospect. But in January 1865 Stranahan asked Calvert Vaux to survey the site. (Vaux and his colleague Frederick Law Olmsted designed Central Park.) Vaux opposed the Flatbush Avenue bisection of the park and immediately set about creating a new plan. He also convinced Olmsted to join him once again, and they submitted their recommendations the following year. 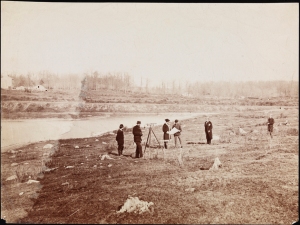 Olmsted and Vaux were appointed landscape architects of Prospect Park on May 29, 1866. Work commenced July 1 of the same year and continued through 1873, when the financial panic halted construction. Though much of the work had already been completed, various components of the park were not finished until well into the twentieth century.

Grand Army Plaza provides one of the many picturesque approaches to Prospect Park. It was one of the first features to be built, although its dominant element, the Soldiers’ and Sailors’ Memorial Arch, was not completed until 1892.

Prospect Park includes land on which the Battle of Long Island (also known as the Battle of Brooklyn) was fought in 1776. This was the first major battle of the American Revolution.

The Valley Grove Tavern stood near Battle Pass, at a point north of the Prospect Park Zoo, along East Drive. It was razed during the planning of Prospect Park.

The Lefferts Homestead was built from 1777-1783 by Lieutenant Pieter Lefferts after Patriots burned the original house while engaging British forces during the Battle of Long Island. 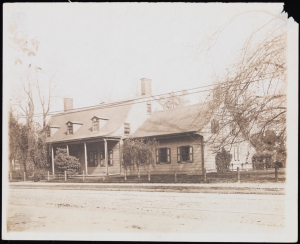 The Friends’ Cemetery is in Prospect Park but, because it is privately owned, is not actually part of the park. The cemetery was established in 1849, although burials took place on the land as early as the 1820s. It is near the entrance to the park at Prospect Park Southwest and 16th Street, off of Center Drive.

Actor Montgomery Clift was buried in the Friends’ Cemetery in 1966 at the request of his Quaker mother.

The Litchfield Villa, designed by Alexander Jackson Davis, was built from 1853-1857 for lawyer, railroad magnate, and real estate developer Edwin Clark Litchfield. Olmsted and Vaux’s 1866 design for Prospect Park included the Litchfield estate, and the building was condemned in 1869. But it still stands today, and houses the administrative offices of the Prospect Park Alliance. 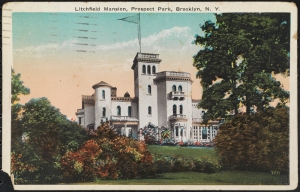 Up until the 1930s, sheep grazed the Long Meadow in Prospect Park. Olmsted and Vaux purposely included sheep in their plan, to provide a pastoral element as well as a practical lawnmower. In 1934, sheep from Central Park’s Sheep Meadow were removed to Long Meadow, to make room for Tavern on the Green. At some point during the decade, all of the sheep were removed from Prospect Park per orders from Park Commissioner Robert Moses. 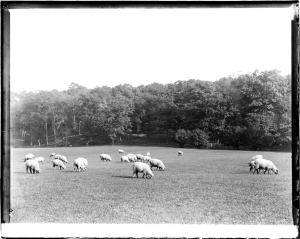 The Boathouse on the Lullwater of the Lake in Prospect Park was built in 1904 by Helmle & Huberty. It reflected contemporary taste for Italian-Renaissance architecture. In 1963, Parks Commissioner Newbold Morris proposed demolition of the boathouse. The once-beautiful structure bore witness to decades of neglect, and the Lullwater was clogged with litter.[3]

Perhaps the bleak memory of Pennsylvania Station’s demolition saved the boathouse from destruction; Morris and other city officials were besieged by protesters who insisted that it be spared. The city relented, and requested $250,000 in the capital budget to restore the boathouse. It was designated a New York City landmark in 1965. It has since undergone two further restorations. 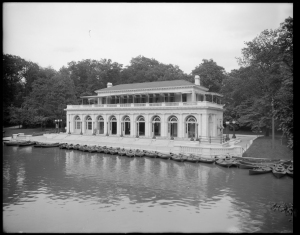 Currently up for restoration is the Vale of Cashmere. The Vale of Cashmere was originally called the Children’s Playground for the play area it contained. In the 1890s McKim, Mead & White redesigned the playground, replacing the sunken pool with a granite balustrade and fountain. The wife of Brooklyn mayor Alfred Chapin renamed the site, apparently inspired by Thomas Moore’s poem of the same name.[4] 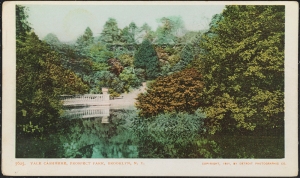 The Prospect Park Alliance is planning a capital campaign to pay for the vale’s restoration. The basin currently choked with vegetation may once more become a reflecting pool.

One comment on “The Crown Jewel of Brooklyn – Prospect Park”