Lucy Ashjian and the Photo League

The name Vivian Maier is well known today – a talented photographer recently plucked from anonymity and brought to the attention of the wider world. Few, however, know Lucy Ashjian, another talented photographer who held a prominent place in the world of New York photography in the late 1930s and early 1940s.

Lucy Ashjian was born in 1907 in Indianapolis to Armenian refugee parents who fled from the Ottoman Turks. Ashjian grew up watching the rise of fascism throughout Europe and reading about the Armenian genocide. Perhaps as a result of Lenin’s intervention on behalf of the Armenians, she became a staunch communist. After graduating with an English degree from Butler University in 1927, she returned home and met her eventual husband Charles Smith Preston, and the pair moved to New York soon after he received a job as a reporter in New York City.

While in New York Ashjian became serious about photography and in 1937 she graduated from Clarence White’s School of Photography. That same year she joined New York’s Photo League, a cooperative of photographers who banded together for social and creative causes. The organization was comprised of many of the most important photographers of the day, including Berenice Abbott, Lewis Hine, Paul Strand, and Aaron Siskind. Ashjian was a regular contributor to the Photo League’s new letter Photo Notes, became a board chairman of the school, and eventually served two six-month terms as the Vice President of the  organization.

Ashjian was an active and respected participant in several of the Photo League’s best-known projects. Perhaps most significantly, she was part of Aaron Siskind’s Feature Group – a unit that was responsible for several projects including “Harlem Document.” 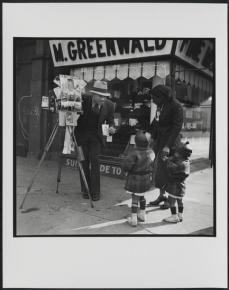 The Museum of the city of New York recently acquired a collection of 36 photographs taken by Ashjian and printed posthumously by her estate. The work in the collection mainly consists of images made while she was a member of the Photo League. The selection includes several areas of the city that were explored in depth by Ashjian – specifically Harlem, the 6th Avenue Elevated train, and the area around the Bowery. Additionally, her interest in communism led Ashjian to photograph several protests and pro-union rallies. The photographs in this collection indicate formal image making practices and demonstrate a human connection to the people and places she photographed. 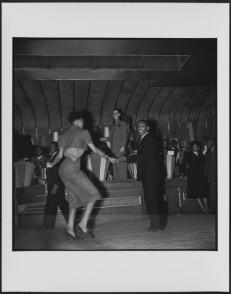 Sadly, her an auspicious career was cut dramatically short. Ashjian left New York and returned to Indianapolis around 1943 when her husband abandoned her and their young child. Preston was eventually committed to a mental institution for a nervous breakdown and later moved back to Indiana to his family. Ashjian never made photographs, other than family snapshots, again.

When the photographer died in 1993 there were only 150 prints and a box of negatives left. These expertly crafted prints were created for the City Museum because so few vintage prints created by the photographer remain. Thanks to the diligent research and work of Christine Tate, the photographer’s niece and executor of her estate, another important figure in 20th century New York photographic history is only now being rediscovered.

You can see all of her work in the City Museum’s online collections portal by clicking here.

One comment on “Lucy Ashjian and the Photo League”