When Portraits Were King: Conversation with Curator Bruce Weber

Curator of Paintings & Sculpture Bruce Weber explains the importance of self-image in 18th century New York, the evolution of the city’s painting scene, and the detective work underlying the exhibition Picturing Prestige: New York Portraits, 1700-1860, which opened on February 5 at the Museum of the City of New York. This interview has been edited and condensed.

Picturing Prestige features a selection of works from the museum’s portrait collection. Have we seen these paintings before?
Some have been exhibited before—the museum often displayed a group of four of the most important portraits in the collection, the likenesses of the Marston-Philipse family by the English-born John Wollaston. This exhibition has given us the opportunity to really show off the earlier portrait collection and conserve some of the oils, miniatures, and frames. Even though the portraits are a large and important area of the collection, they have yet to receive the study and scholarly treatment they deserve.

Why do they deserve more attention?
In terms of painting, portraiture was “king” in the city through the mid-19th century, when genre and landscape painting began to take more of a hold on American artists. This show reveals the unfolding story of the development of art in New York. We highlighted the lives and careers of the artists in the labels.

Fans of the contemporary art world might wonder, how did this all begin in New York? It’s a great story—how New York painting has evolved, how the art of the city progressed over the 160 years from 1700-1860.

You also highlight the subjects in the labels.
One of the primary ideas embedded in this show is the concept of prominence, and identifying the New York elite. In part people wanted to have their portraits painted to show off their place in society. Visitors will discover some of the key citizens—including a number of political leaders and members of the mercantile community.

The names of the artists and the sitters will be new to many people though.
Some will be—for example, we have three works attributed to members of  the Duyckinck family, who dominated New York portraiture in the early 18th century. They resided here. In the 18th century it was not uncommon for painters to come from abroad for temporary stays. In the years immediately after the Revolutionary War, more painters came and settled in the city.

The exhibition includes a group of portraits of members of the Brooks family, including John E. Brooks, one of the clan of brothers who operated the famous clothing firm Brooks Brothers.  The store was founded by their father Henry in 1818 in New York, and early on they had a store down on the corner of Catherine and Cherry Street. The store specialized in retailing ready-to-wear men’s suits. This contrasts with the mercantile pursuits of New Yorkers of the early 18th century who dealt internationally in a wide range of raw materials and imported goods — the exhibition reveals the dynamic nature of wealth in the city.

And you included portraits of stars like Alexander Hamilton, too.
Yes – Hamilton was very important to the reinvention of New York in the years after the Revolution. We have two portraits of him in the exhibition. One is by John Trumbull, who created at least eight-bust length replicas after Hamilton was felled by Aaron Burr in 1804. We also have a miniature by Charles Willson Peale from 1777, when Hamilton was serving as George Washington’s aide de camp.

What are some of the challenges of curating an exhibition like this one?
When I began to work on this exhibition, there were a number of questions relating to attribution and dating. Some portraits came into the collection without any identification as to the artist, or were misattributed.  In order to resolve these ambiguities, I spent time reviewing oil portraits and miniatures covered by the time span of the exhibition at various institutions, including the Albany Institute of History & Art, the Metropolitan Museum of Art, the National Portrait Gallery and the National Gallery of Art. I also reached out to various scholars and curators in the field. Ellen Miles, Curator Emerita at the National Portrait Gallery in Washington, was extremely helpful. As a result of looking, reading, and talking with the community, I was able to confirm designation of the artists as well as questions of dating.

So curators of historical art are also doubling as detectives?
Yes—this type of digging requires detective work. It’s important to try and firm up these things. For example, there are two paintings in the collection that were believed to be by either Philip Parisen or John Vanderlyn. After seeing the two portraits by Parisen in the collection of the American Jewish Historical Society, there was no question in my mind that he was the painter of the pair we have, featuring George and Hannah Clinton. Although Parisen had an active career in New York, the likenesses at the American Jewish Historical Society are the only ones that have been definitively assigned to him.

Among other things in terms of re-dating portraits, I worked closely with the City Museum’s curator of costumes and textiles Phyllis Magidson – looking carefully at style of the various sitters dress. Dress often provides valuable clues as to when a portrait was created. 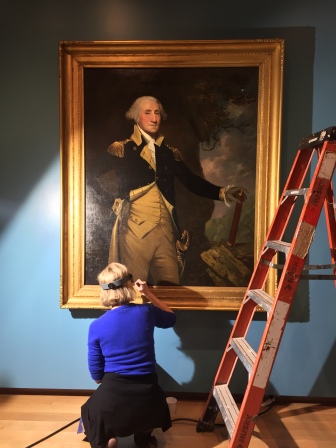 You also conserved several works during the course of this show.
Specifically for this exhibition we conserved 4 oils, 20 miniatures, and 20 frames. Fifteen of the portraits, and the accompanying frames, were conserved under a matching grant that we received in 2010 from the National Endowment for the Arts. Among the more remarkable transformations was the portrait of Mary Lavinia Brooks, daughter of the Brooks Brother partner Edward Sands Brooks, by William Sidney Mount. Following cleaning tests, the painting really came to life.

So in addition to being a detective, you have to be knowledgeable about conservation, as a historical curator?
Painting curators need to be able to identify conservation concerns. We learn a lot from the conservators we work with and going to their lab and looking at works together.

The hashtag for this show is #unselfie. What would the painters and their subjects say about today’s snap-happy, self-documenting culture?
In the mid-19th century New York City began to become modern. In some ways I wouldn’t say we’re that different from New Yorkers of that day. Some of their aims and aspirations were a lot like ours.

3 comments on “When Portraits Were King: Conversation with Curator Bruce Weber”