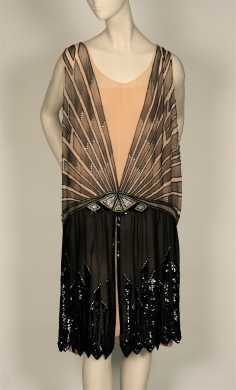 Un-constructed T-shaped frocks like these were worn over next to nothing, leaving little to the imagination. Evening dress in silver lame with applied silver bugle beads and pearls in swirl motif, 1926-1927. Museum of the City of New York, 72.206AB.

The decade that gave rise to the Chrysler and Empire State Buildings, the speakeasy, and the big band also brought with it soaring hemlines, breast-freeing bandeaus and the “uplift” brassiere, among a host of other liberating women’s fashions. After women finally won the right to vote in 1920, and following the cataclysmic years of the First World War, the Roaring Twenties reflected a youthful defiance, and a rejection of society’s traditional encumbrances by a newly enfranchised feminine public. Women cast off their figure-distorting corsets, took to wearing make-up and fragrances, and partook of New York’s surreptitious nightlife.

The spirit of those “Jazz Age” years lives on in New York—and at the Museum of the City of New York, it’s represented in 95 garments from our renowned Costumes and Textiles collection. This summer, we’ve been selected as a finalist in EMC’s Heritage Trust Project to photograph and archive these fashions—and you can help us, when you cast your vote here. With your support, EMC will grant the Museum up to $15,000 to digitize and provide free online access to this collection. 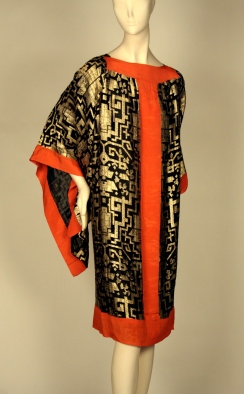 By the 1920s, New York City’s status as an international fashion capital was firmly in place. Our collection from the era includes rare surviving garments by celebrated New York designers such as Henri Bendel, Hattie Carnegie, Peggy Hoyt, and Mme. Francis, and notable women who wore them, including Mrs. Fritz Kreisler (wife of the renowned violinist/composer), Mrs. Theodore Roosevelt, Jr., and Elsie Whelan Goelet Clews who was a favorite muse of the Parisian couturier Paul Poiret. Her “Walls of Troy” azure blue gold-embroidered evening gown is one of the collection’s treasures.

Designers of this era relied on New York stage productions to premier new creations, and actress Ann Andrews debuted styles by Chanel, Boué Souers, and Lanvin, all of which are well-represented within the collection. Among other highlights proposed for digitization and upload to the Museum’s user-friendly Collections Portal are Andrews’s 1922 silk satin chemise gown embroidered in silk floss and copper metallic thread by Mme. Francis worn in Her Temporary Husband, and an extremely rare beige and brown Rodier wool Chanel suit.

Public interest in costume history is growing, as evidenced by our previous exhibition  Stephen Burrows: When Fashion Danced, and the recent behind-the-scenes digitization project Dressing Room, which provided the public with an opportunity to view our breathtaking collection of mid-19th century garments. 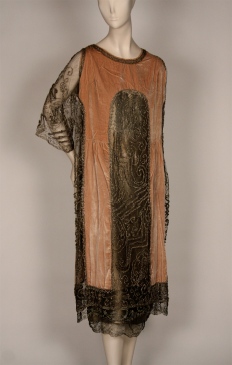 The very fragile nature of textiles makes it difficult to showcase the collection outside of temporary exhibitions. As wearable and functional objects, garments were subject to external elements such as moisture, light, and temperature changes. They came in direct contact with the inherent heat and perspiration of the human body, as well as chemicals associated with cosmetics and fragrances. Bodily motion strains fabric and stitching, increasing the garment’s potential for degradation through wear.[/caption]

In addition, garments from the 1920s were no longer separated from the body by layers of undergarments and a rigid structure of corsets, crinolines, and bustles, as characterized earlier periods. Over time, the inherent vice carried by the popular silk textiles of the 1920s led to shattering of the fabric as a result of metallic salt additives, and was further exacerbated by the weight of elaborate beading and decorative surface embellishments, leading to holes and tears. 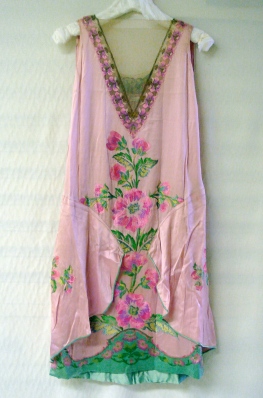 Even once the threat of regular wear had passed, clothing was historically stored in attics and basements subject to extreme climate fluctuations, endured gravitational drag as a result of improper hanging, and suffered damaged through exposure to acidic wooden hangers or pressure from metal clips.

In contrast, the Museum’s Costume and Textiles Collection is stored in a state-of-the-art curatorial center, completed in 2008 and equipped with high-density shelving and zoned climate control for different media types. However, the Museum cannot reverse the effects of time on garments prior to their accession into the collection, and each time a garment is handled, it endures further strain.

Our best opportunity to showcase these vintage garments is therefore through photography and digitization, which offers the public the added benefit of searching our archives by stylistic feature, material, designer, color, and garment type. The high resolution digital images will allow visitors to analyze their construction and examine their finest details by using the Portal’s zoom feature, which magnifies images up to 200%.

Evening dress in black net over magenta satin with gold metallic and chenille embroidery, ca 1920s. Museum of the City of New York, 79.15.7.

While these costumes will be imaged and cataloged as stand-alone objects, an online exhibition, Worth/Mainbocher: Demystifying the Haute Couture provides similar examples of our photographic documentation and cataloging, and will soon be joined by an additional 550 garments from the 1940s, 50s, and 60s. Once these garments are available online, students, designers, curators, and fashion historians and enthusiasts all over the world will be able to enjoy them.  Digitizing these garments will also preserve an important era in the city—and the nation’s—history.

Help the Museum digitize these stunning garments from the 1920s by casting your vote today!

5 comments on “Corsets Begone: Women’s Fashions of the Roaring Twenties”