In 1904, there was much rejoicing uptown over the opening of a women-only gym situated between Barnard College and Teachers College.  The New York Times noted that the men at Columbia’s gymnasium, who had been allowing the co-eds use of their facilities, would no longer have to put up with “hairpins, combs…and the dyestuffs” from women’s bathing suits clogging up their pool. 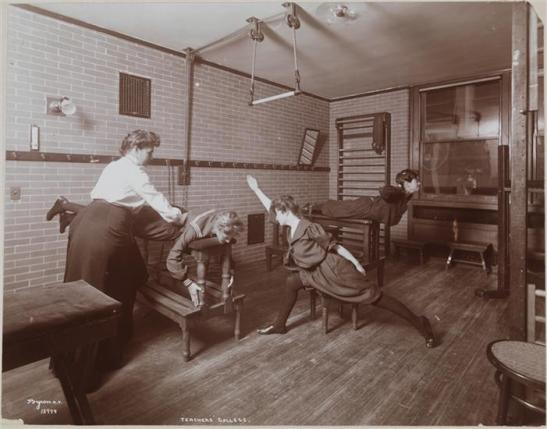 But one of the more advanced features was discovered by our team of catalogers, when they came across the following image and tried to hypothesize about what activity the woman might be engaging in.  Was she communicating with a forbidden lover in the basement via air duct?

A perusal of Gotham Comes of Age found a mention of a “much popular hair-drying room” installed at the gym, and the 1904 article in the New York Times proclaimed that “the feature in the new gymnasium upon which the girls are most profuse in their encomiums is the novel hair-drying room, located in the basement.”

According to the Times the steam and hot air pipes would raise the temperature in the room to 150 degrees, presumably producing an effect akin to trying to dry one’s hair in a sauna and a steam room at the same time.  The only other reference I could find to this sort of contraption was a 1915 installation at the women’s gymnasium at the University of Iowa, which used hot air circulated from the boiler room by electric fan.

We’d love to hear from any hairdo historians out there who have insight into these contraptions.