The “Dimming” of Times Square

Close your eyes. Think of Times Square. Imagine all the chaos, the sounds, the overwhelming rush of humanity illuminated by the never-ending glow of neon and electric lights. Would Times Square, not to mention the whole city, be the same without the  neon and glittering lights? During World War II, that question was a reality as the city enacted a nightly dim-out that was meant to protect New York from both air and naval attacks by disguising the recognizable skyline.

Dim – Out Traffic. Times Square during dim out. R.W. Shipman. Museum of the City of New York. Photo Archives.

The first mention of the dim-out was in January 1942. Over the next six months the various rules and regulations of the dim-out crystallized into a thorough document that covered everything from which direction light can escape from windows to the wattage of marquis signs.  The full text of a New York Times article on the subject is  here.  For the next eighteen months, the streets of the five boroughs were dark, there were no lights above street level, outdoor baseball games were banned, and Times Square was a “gloomy cavern.”

These pictures show Times Square in the height of both the dim-out and the war. The lack of light allows the moon and stars to be seen from the middle of Times Square – a phenomenon that the New York Timesclaimed hadn’t happened since 1917.

Billboards are in shadows, marquis are dark, but Times Square was still the place to be. 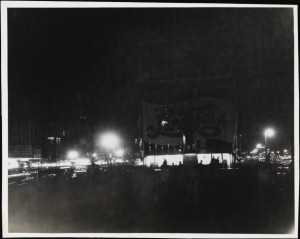 Gone but Not Forgotten. Photograph by J.G. Suter. ca. 1945. Museum of the City of New York. Photo Archives.

2 comments on “The “Dimming” of Times Square”