A Trip Up Broadway

From 1916 to 1921, Arthur Hosking photographed Broadway, from its southernmost leg at Bowling Green all the way north to Yonkers. Here are some highlights, all taken in 1920 unless otherwise noted. 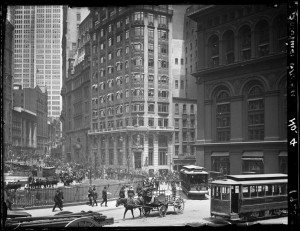 At the far right of this photo is the Produce Exchange, which was demolished in 1957. This photo was taken in 1921, when both street trolleys and horse-drawn carriages competed as viable means of transportation.

A photo taken a few blocks north at Broadway and Rector Street shows pedestrians, automobiles, and street trolleys competing with each other for space. Trinity Church is on the left. 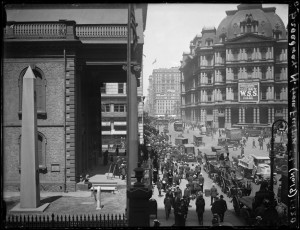 Broadway is bustling at the intersection of Fulton Street. St. Paul’s Chapel, seen on the left, was built from 1764 to 1766 and is Manhattan’s oldest continuously-used public building. In 1966, it was placed on the National Register of Historic Places and designated a landmark by the New York City Landmarks Preservation Commission. The City Hall Post Office on the right did not fare so well. Built in 1878, it was immediately despised by city officials and the public alike. It was razed in 1938 in anticipation of the 1939 World Fair. (See http://www.nyc-architecture.com/GON/GON022.htmfor more details.)

Arthur Hosking. Broadway Series. View of east side of Bway, looking north from Lispenard and Canal Street, where the two streets converge. Museum of the City of New York. X2010.18.58

Taken in TriBeCa, this photo shows an advertisement for Nehemiah Gitelson & Sons. Nehemiah Gitelson immigrated to the United States from Poland in 1880. In addition to running the family company, he supported Jewish scholarship. In honor of his patronage, the Jewish Theological Seminary named his donation of over 1,100 volumes the Nehemiah Gitelson Talmudic Library.

In 1815, the intersection of Broadway and the Bowery (now 4thAvenue) was designated a public meeting space and named Union Place for the convergence of the city’s main thoroughfares. The city gradually began to acquire surrounding land, and in 1832 Union Place was renamed Union Square. 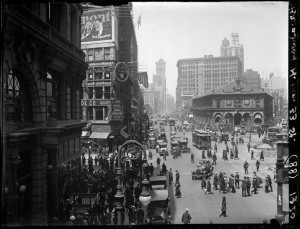 This photo shows Saks & Co. on the left, then Macy’s. To the right is the New York Herald building. Only the Macy’s building survives today. Saks & Co. merged with Gimbels  to form Saks 5th Avenue in 1932. However, the original Saks building in this photo operated under the name Saks 34thStreet until its closure in 1965. The New York Herald building was designed by Stanford White of McKim, Mead & White in 1894 and demolished in 1921.

This photo shows the heart of Times Square. To the left is Hotel Astor, built in 1904. Before 1904, the area was known as Longacre Square, but Adolph Ochs, owner and publisher of the New York Times, convinced the city to officially rename the space Times Square. Hotel Astor remained until its demolition in 1967. 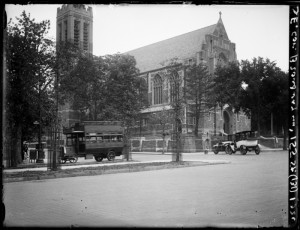 Here is the Church of the Intercession in Hamilton Heights. It was only 8 years old when this photo was taken.

The photo below shows Broadway at a much slower pace in the Riverdale section of the Bronx. The Broadway Inn is to the left.

7 comments on “A Trip Up Broadway”