So far, we’ve begun work cataloging and re-housing the photography collection, which contains thousands of negatives, slides, and prints of ships at port, docked at the South Street Seaport, and at sail in New York Harbor, as well as more general marine topics. 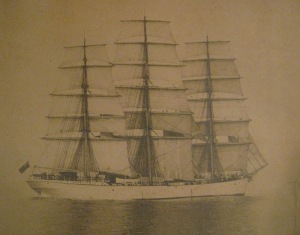 Carol created and arranged the Passenger Liner collection, one of the larger collections in the archives. Programs, photographs, passenger lists, schedules, and promotional brochures are among the many items found in this collection.

We’ve also started to inventory and survey a very large collection of ship plans.  There are over 30,000 drawings and while we’ve just begun to see what’s here, we’ve already found great objects, including an almost complete set of plans for J. P. Morgan’s yacht, Corsair.  In the center of the plan you can see a white square, which is an alteration to the design made a day after the original was drafted, perhaps to conform to Morgan’s taste.

Part of this process includes cleaning.  Some plans date as far back as the 1870’s,  and occasionally they are in need of basic treatment to remove dirt.  Soiled objects are cleaned with an archival paper cleaner, which is rubbed against the object’s surface, much like one would use an eraser (visible in the first image).  Below is a particularly dramatic illustration of a drawing “before and after.”

Stay tuned for more updates and stories of our finds in the South Street Seaport Museum’s archives!