The digital team is eagerly awaiting the return of Mad Men to television on Sunday, March 25, after a 17-month hiatus. In anticipation of this, we have  pulled together an assortment of Mad Men-related images to share with you.

Near the end of the first season, Sterling Cooper employees have an all-night, booze-fueled party to watch the presidential election of 1960 live on television. Here is a photo of John F. Kennedy with Jackie on October 19, 1960, less than a month away from his election to the office of President. 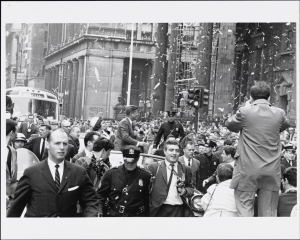 Burton Berinsky. John F. Kennedy and Jacqueline Kennedy in a ticker-tape parade. Museum of the City of New York. X2010.11.10964

In season 3, representatives of Madison Square Garden hire Sterling Cooper for a public relations campaign, hoping to diminish negative publicity surrounding the proposed demolition of Pennsylvania Station. The station was designed by renowned Beaux-Arts architecture firm McKim, Mead & White. The New York Times glowingly reported on the opening of Penn Station in an article from August 29, 1910: “This Seventh Avenue facade was conceived especially to symbolize in most imposing fashion a monumental gateway. It may be compared, with due allowance for its more massive proportions, to the Brandenburg Gate in Berlin, through which passes so much of the traffic of that city.” 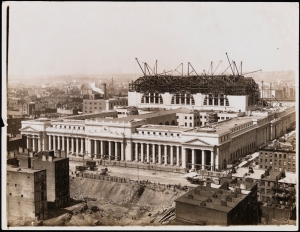 Construction of Pennsylvania Station. Museum of the City of New York Photo Archive.X2010.11.5087 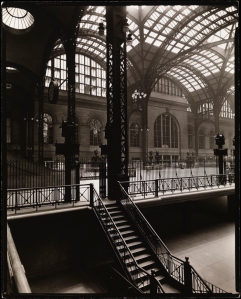 In 1961, owners of Madison Square Garden announced that the entertainment arena would be moving from its  location on Eighth Avenue between 49th and 50th Streets to the site of Penn Station.  The relocation would require the demolition of the Penn Station structure, billed by Garden officials as necessary for modernization and progress. But the decision to demolish Penn Station was a controversial one. A New York Times article from October 29, 1963 bemoaned the change: “A building that sometimes made a ceremony out of a journey, the station reached the end of the line, architecturally, at 9 A.M. Electric jackhammers tore at the granite slabs of the side of the terminal near the 33rd Street entrance, crushing the hopes of a band of architects who had rallied to save what the Municipal Art Society called ‘one of the great monuments of classical America.'”  Partly in response to Penn Station’s demolition, NYC’s Landmarks Preservation Commission was established in 1965. 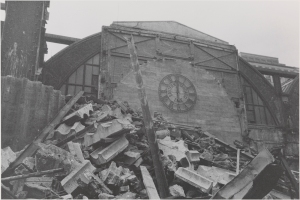 The specter of the Vietnam War appears in season 4, with a character preparing to be shipped off to Vietnam. 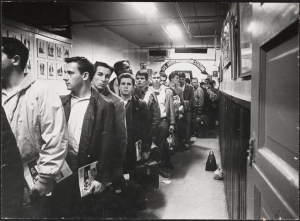 As these photos illustrate, attitudes about the war were divergent and often politically divisive. Below is Martin Luther King, Jr., marching with pediatrician Dr. Spock and labor activist Monsignor Rice in the Spring Mobilization for Peace in 1967. 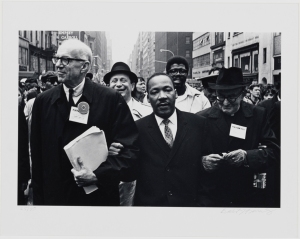