Ghosts of the 6 Train

New York City’s vast transit system is in a constant state of flux, expanding to fill the needs of underserved areas and simultaneously contracting due to budget cuts or obsolescence. Abandoned subway stations across the city remind us of how transit has changed over the years.

On March 24, 1900, the Interborough Rapid Transit Company (IRT) broke ground in a ceremony at the front steps of City Hall for the construction of a subway system. This was not the first attempt at subterranean transit in the city, but it was the most comprehensive. 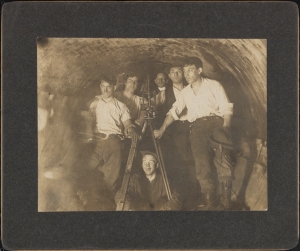 Photographer unknown. Engineers in tunnel during construction of present IRT at City Hall Station. ca. 1900. Museum of the City of New York. 46.245.2

Only four years later on October 27, 1904 at 7 PM, subway stations spanning about 9 miles from City Hall to Grand Central, and Times Square to 145th Street and Broadway opened to the general public, with an estimated 150,000 people paying 5¢ to ride underground. 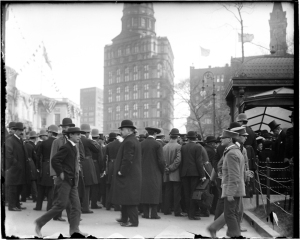 The line’s southern terminal, City Hall, was intended to be the system’s showpiece and differed vastly from the other subway stations with its vaulted ceilings covered in Guastavino tiles, leaded skylights, and brass chandeliers.

For all its elegance, however, the station was never as important as officials hoped it would be. Its proximity to the much-busier Brooklyn Bridge station made it somewhat redundant. In addition, the tight curve of the platforms was deemed too difficult to lengthen when the Board of Transportation embarked on a $13 million project in 1944 to expand subway platforms to accommodate increasing ridership.

Although it closed as a subway station on December 31, 1945, the City Hall station continues to serve as a loop for downtown 6 trains returning to the local uptown track. You can see the station for yourself if you stay on the 6 train after the Brooklyn Bridge stop. 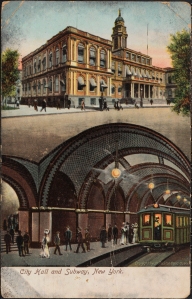 Just two stops uptown was the Worth Street station, situated at the intersection of Lafayette Street and the northwest corner of Foley Square and Thomas Paine Park. It provided easy access to the numerous government facilities in the area.

The station’s platforms were lengthened twice, in 1910 and again in 1948. But improvements made to the Brooklyn Bridge station in 1956 extended egress to the north at Foley Square and Pearl Street, making the Worth Street station redundant. It closed in 1962.

Six stops uptown from Worth Street, the 18th Street station became a casualty of the platform expansion project begun in 1944. Its closure on November 8, 1948 coincided with the opening of the 22nd Street entrance to the 23rd Street station. 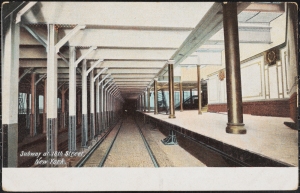 Try looking up from your book the next time you commute, and you may see glimpses of the past flashing by outside the window.

5 comments on “Ghosts of the 6 Train”