Thanks to a generous Cataloging Hidden Special Collections and Archives grant from the Council on Library and Information Resources (CLIR), as Project Archivist, I now have the pleasure of exploring and organizing the rich array of World’s Fair objects at both the Museum of the City of New York and Queens Museum of Art along with Hoang Tran, the project’s Archival Fellow.  The two museums have embarked on an 18-month project to make their collections from the 1939/40 and 1964/65 New York World’s Fairs accessible.

Since late March when Hoang and I began to work with and explore the materials, I have often longed to transport myself back to the Fairs and take in the sights, smells, and sounds in person. While archivists don’t possess time traveling machines, we do the next best thing by providing historical context through our arrangement and description of the materials. In this case, we hope that our guide to the collections, or “finding aid,” will allow researchers to construct their own Fair “visits.”

Official Guidebooks, 1939 and 1964, in the New York World’s Fair collection. Museum of the City of New York.

Lacking that time machine, in order to remain true to the character of the Fairs, we turned to the Official Guidebooks to organize materials as the fairs themselves were physically organized: by zone or area and by exhibit. This approach is not without challenges, as identifying subjects in photos is not always straightforward and research time is limited. When necessary, we make educated guesses based on the information available, or use more general categories.  Once the collections are accessible, we expect that researchers will have insights which will help refine our work.

The 1939/40 Fair was divided into seven “zones” and the 1964/64 Fair into five “areas.” As we used the guidebooks to familiarize ourselves with the organization of the Fairs, we were occasionally surprised by what we learned.  For example, the Infant Incubator at the 1939 Fair, which housed premature infants viewable through glass windows, was located not in the Medical and Public Health Building as we had guessed, but rather in the Amusement zone.  Such distinctions demonstrate how public ideas of “amusement” have changed over time, illustrating the essential nature of primary sources when describing and investigating the past.

Our second challenge was scouring the Museum’s collections for all evidence of World’s Fair materials. 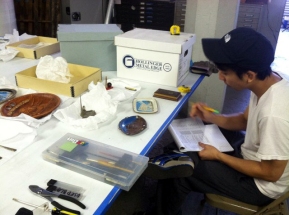 One of the unique characteristics of this collection is the diversity of object types represented. In addition to the boxes that had been set aside for processing, World’s Fair related items are present within the Decorative Arts; Costumes and Textiles; Photographs, Drawings, and Prints; Theater; and Toy collections. 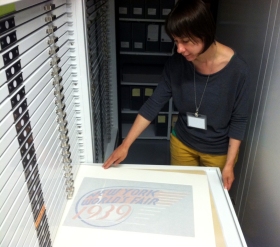 To locate and describe these materials, we searched the Museum’s collections management system and consulted with curators to take advantage of their knowledge of their collections.  A highlight is a group of several hundred design renderings which have already been digitized and made available on the Museum’s online Collection Portal. The majority of the items, however, have been underutilized due to their disparate locations and lack of description. While these objects will continue to “live” in their respective departments, we are excited to bring them together intellectually in a single finding aid for the first time.

Later in the summer the World’s Fair project team will move to the Queens Museum of Art (QMA), where we will inventory their extensive collection and integrate it into the finding aid. We have already surveyed boxes and objects at their offsite facility, with an eye towards ensuring that the archival arrangement developed for the Museum of the City of New York’s collection will accommodate both museums’ holdings.

In addition to an extensive collection of printed ephemera and photographs, the QMA possesses unique items including film and audio recordings, world’s fair uniforms, and materials documenting Salvador Dalí’s Dream of Venus exhibit at the 1939 Fair. The QMA building was in fact originally designed to house the New York City Pavilion at the 1939 Fair and its Panorama of the City of New York, of world-wide fame, was commissioned by Robert Moses for the 1964 Fair.

The World’s Fair team uncovers a flag from the 1939 Fair.

A large portion of both Museums’ World’s Fair materials were donated by average fair-goers who picked up pamphlets, maps, and souvenirs during their visits; photographed the strange and wonderful sights; and sent postcards to friends and family. One imagines the Fairs loomed large in the donors’ personal histories, prompting them to save ephemeral items and seek out institutional homes for their preservation.  We are honored to be entrusted with the job of making these collections  accessible, and we hope you will join us for the duration of the grant as we make more highlights and discoveries available on our tumblr.