An iconic example of Gothic Revival furniture, a chair (MCNY 35.257.67) designed by Alexander Jackson Davis (1803-1892), is one of the highlights of the Museum’s furniture collection. It was designed in the early 1850s and its manufacture is attributed to William and Thomas Burns, known as Burns and Brother, in New York City between 1857 and 1859.  An elegant expression of the Gothic Revival style, this chair derives from designs made as part of an architectural commission Davis undertook in the 1850s.  Nineteenth-century architects were known to design landscapes, furniture, and other parts of a building’s interior and exterior.  But why this chair was made in both oak and walnut, and the ownership histories, or provenance, of both versions of these chairs have yet to be determined.

Davis was among the leading architects in the United States in the 1840s and 1850s and is closely associated with American Gothic Revival style.[1] The Gothic Revival style was popular in the United States from around 1830 to the beginning of the Civil War.[2] It emerged in England at the turn of the nineteenth century as the country’s designers sought to move beyond the ornate styles of the eighteenth century, particularly the exuberant Rococo, and employ ornamental motifs in a more sober and restrained manner. In the context of a rapidly-industrializing English society, the medieval period was idealized and romanticized by writers, artists, and designers. These designers, the most well-known of whom is A.W.N. Pugin (1812-1852), began to adapt forms and ornament of existing medieval churches, universities, and castles for new buildings, objects, and interior design.  In the United States, Gothic Revival style is characterized by the use of medieval architectural forms, such as pointed arches, the shape of stained glass windows—known as tracery, and spires, in an ordered, restrained manner. For the better part of the 40 years between 1830 and 1870 it was at the height of taste. It was seen as dignified, intellectual, and grand and wealthy New Yorkers commissioned estates in this style. 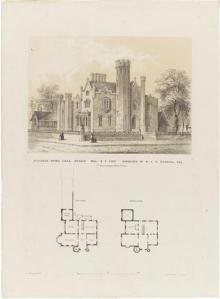 Davis was born, went to school, and worked in New York City. He studied at the American Academy of Fine Arts, the New-York Drawing Association, and the National Academy of Design. He worked as a printer and illustrator before being hired by the architectural firm of Ithiel Town in 1826, where he was made a partner in 1829. The collaboration lasted until 1835, but in nine years Davis, who started his career designing Neoclassical buildings, developed the skills, professional contacts, and reputation that allowed him to create over 100 grand country homes, many near the Hudson River, for New York City’s elite in his mature Gothic Revival style.  Davis’s best-known work in the Neoclassical style in New York City is  Federal Hall, which was constructed between 1833 and 1842.  A prolific architect, his extant work can be seen in numerous sites in the Midwest and on the East Coast.  His work at Lyndhurst, an estate in Tarrytown along the Hudson River, today owned by the National Trust, exemplifies his later style and its atmospheric, landscape-driven sensitivity. 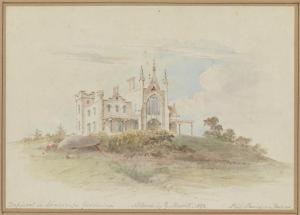 Made of black walnut, the Davis chair’s splat, or back, evokes the tracery of medieval stained glass windows. Its gently curving rear legs and splat, beautifully carved ears (the features on the far top ends of the splat), and cloven deer hoof feet are indicative of the restrained but complex ornamental features of the early Gothic Revival style, as expressed by Davis. This temperament is found in other examples of his work in the Museum’s collection, such as two watercolors by Davis of designs for chairs, seen below.

Other watercolors and work by Davis at the Museum can be viewed in high resolution here.

Nine tracery-back chairs designed by Davis are known to have been produced in the late 1850s.[3] Four are oak and are probably those commissioned for and used in the estate of John J. Herrick (1816 or 1817-1887) constructed between 1855 and 1859 in Tarrytown, New York. Herrick was a flour merchant who spent so much of his considerable wealth on the project that he was forced to sell the house, called Ericstan, in 1865.[4] For over forty years, the building was used as a school for girls before being demolished in 1944. Records at the Metropolitan Museum of Art indicate that in 1853, Davis had eight armchairs, eight side chairs, a table and a bed frame made for Ericstan.[5] The history and location of most of these objects is not known.

The chair in the Museum’s collection has the most complete provenance of the five known walnut examples, as it was donated in 1935 by Davis’s son, Joseph Beale Davis, who inherited it from his father. Tradition suggests that his father had so admired the design that he had the chair made for his own home. While that story is not at odds with the chair’s material, period of manufacture, or style, it is known that Joseph Davis took some liberties with his father’s history (in some cases adding dubious inscriptions to his father’s works on paper). Without any demonstrable evidence there is no way to be certain Alexander Jackson Davis commissioned this chair for his own use.

Much about this chair history remains in question, such as why and for whom the walnut versions were made. More examples may exist. There is no consensus on which manufacturers produced furniture designed by Davis and for how many years. There is much work to be done on Gothic Revival furniture in New York City and the United States as a whole, and its decline in popularity has resulted in gaps in our understanding of it. As scholarship advances, perhaps more furniture will be attributed to Davis and a more complete ownership history of these chairs will emerge. For now, befitting its style, much about this chair remains a beautiful mystery.