The Museum is digitizing 30,000 photographs of Broadway and off-Broadway productions dating from the 1860s up to the 2000s with a Museums for America grant funded by the Institute of Museum and Library Services. Some of the material is already available on our online Collections Portal. While cataloging the photographs, I couldn’t help but notice how many performers died at a young age, or from tragic or unusual circumstances. I started keeping a list of entertainers whose lives were abruptly cut short. Please join us now for a tour of the sad demises of Broadway stars:

Nelson Decker enjoyed a promising career as an actor in the mid-nineteenth century. He was a member of the Actor’s Fund of America and joined the prestigious company of Booth’s Theatre when it opened in 1869. In 1881 Decker married English actress Ward Almayne but the marriage was unhappy and soon Decker’s career and health began to decline. In 1891 he was admitted to the Edwin Forrest Home for aging and infirm actors. Not two months after arriving at the home, Decker slit his wrists and throat. A servant found him still alive but lying in a pool of blood. Doctors attempted to save his life but there was nothing they could do and he passed away a week later on December 2, 1891.

Brothers William and Gordon Dooley performed stunts and acrobatics together as the Funny Dooleys in a number of vaudeville shows, but their deaths were decidedly unfunny. William Dooley was known as a martyr to stage work and this devotion ultimately ended his life at the age of 39. On the night of his last performance, he presciently remarked to his brother: “Let’s make it good – we haven’t many more shows to give together.” William Dooley reported for work the following day, September 29, 1921, but his body collapsed from the years of constant strain. 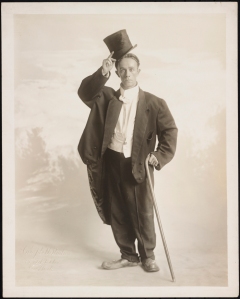 Gordon Dooley continued to perform in vaudeville and musical comedy but outlived his brother by only nine years. He suffered a nervous breakdown in 1929 and died of pneumonia at the age of 31 on January 24, 1930.

Beloved Broadway actor Gregory Kelly starred in the 1925 play “The Butter and Egg Man,” written by George S. Kaufman. He played Peter Jones, an out-of-towner who decides to invest $20,000 in a Broadway show. The play was a resounding success – it toured the following year and was even optioned for a movie. Film columnist Louella Parsons wrote on June 2, 1926: “If First National doesn’t get Gregory Kelly to play the lead in “The Butter and Egg Man,” I will never speak to any member of the organization again. To bring this play to the screen without Gregory Kelly, would be like serving apple pie without cheese, just an unpardonable omission.” Unfortunately for Parsons and everybody else who loved Kelly’s performance, he suffered a heart attack while on tour with “The Butter and Egg Man.” He never fully recovered and passed away on July 9, 1927 at the age of 36. 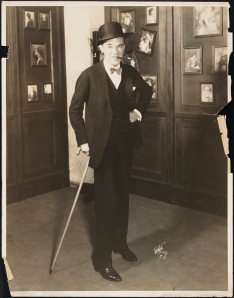 British actress Elsie Mackay (the woman leaning against the piano in the photograph below) had a successful career on Broadway but her true passion was flying. In March 1928 she attempted to become the first woman to across the Atlantic Ocean, teaming up with an experienced aviator, Captain Walter G. Hinchcliffe. Not long into the westward flight, Mackay and Hinchcliffe disappeared off the coast of Ireland and were never seen again.

Peg Entwistle had already performed in over 10 Broadway shows when she played the role of Amy Grey in the 1932 production “Alice-Sit-by-the-Fire.” That same year she left for Hollywood, hoping to find as much success on the screen as she had on the stage. This proved elusive and on September 19, 1932, Entwistle jumped to her death from the 50-foot “H” of the Hollywoodland sign (the sign was shortened to Hollywood in 1949). She left a suicide note which read: “I’m afraid I’m a coward. I am sorry for everything. If I had done this long ago, it would have saved a lot of pain.” She was only 24. 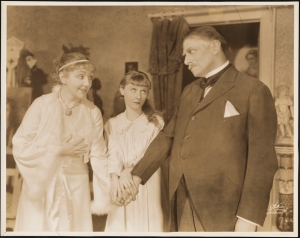 Hal Skelly joined a traveling circus at the age of 15 and moved to the company of Barnum & Bailey a few years later. He also appeared on Broadway in productions such as “The Night Boat” in 1920 and “Betty Lee” in 1924. In 1927 he played what was possibly the greatest role of his career, the part of Skid in “Burlesque.” He had just finished the production “Come What May” when a truck he was driving was struck by a train on June 17, 1934. He died instantly at the age of 42. Skelly had been looking for a friend’s dog when his vehicle rolled onto the train tracks. Police surmised that he might have mistaken the forward gear for the reverse.

Bill Callahan performed in many long-running Broadway musicals of the 1940s and 1950s such as “Call Me Mister,” “As the Girls Go,” and “Top Banana.” In 1951 he married Eleanor Rao and joined her father’s business, Arc Electrical Construction Company. In 1980 he resigned from the company and ran off with a 29-year-old chorus girl named Wendy McDade. His father-in-law Charles Rao accused him of embezzling millions of dollars from the firm. Callahan and McDade were last seen alive leaving Chicago’s Continental Plaza Hotel the night of March 17, 1981. Their bodies were found the following day in the Chiwaukee Prairie nature preserve in Wisconsin – both victims had been shot three times in the head. To this day the murders remain unsolved.

James Hayden grew up in Brooklyn and lived on the streets as a teenager. He worked hard to overcome his past and was accepted to the American Academy of Dramatic Arts despite having no acting experience. After playing the part of Rodolpho in “A View From the Bridge,” he garnered critical acclaim for his portrayal of the heroin addict Bobby in “American Buffalo.” But in a grim case of life imitating art and just six hours after receiving a standing ovation for this performance, Hayden died of a heroin overdose at the age of 29 on November 8, 1983.

Beautiful Marjorie Battles debuted on Broadway in the 1965 play “Cactus Flower.” She remained in the cast for 650 performances and then left the stage for a teaching career, although she continued to play bit parts on television shows. After her sister died of cancer in 1979, Battles became despondent and spent the remainder of her life as a recluse in her family’s rowhouse in South Philadelphia. She ended her life on October 18, 1987 by jumping in front of a Philadelphia subway train. 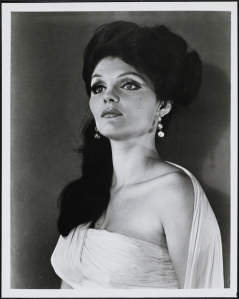 Norman Kean and Gwyda DonHowe led an apparently happy life together. They met in 1957 while working in summer stock and married the following year. He became a theatrical manager and producer and she regularly appeared on the Broadway stage. But despite his best efforts, Kean never accomplished more than mediocre success: his most lucrative production, “Oh! Calcutta!” was seen as a gimmicky tourist attraction rather than a respectable show. Most of the shows Kean produced were flops, like the 1978 production “A Broadway Musical.” It ran for 26 performances at the Theatre of the Riverside Church before moving to the Lunt-Fontanne Theatre, where it opened and closed the same night.

“A Broadway Musical” sticker. Theater archives, Museum of the City of New York.

Kean (the man in the center of the photograph below) never produced another show after “A Broadway Musical.”

“A Broadway Musical” program. Theater archives, Museum of the City of New York.

In 1987, Kean learned that DonHowe (shown in the photograph below, to the right) was having an affair. He attempted to save his marriage by staying home more often, but a private investigator told Kean that DonHowe continued to see her lover. On January 11, 1988, Kean stabbed DonHowe to death as she lay sleeping and then jumped to his death from the roof of their apartment.

Does life imitate art, as Oscar Wilde famously opined, or is it the other way around? In any case, the dramas enacted by these performers onstage had counterparts in the actors’ lives, and their sorrowful deaths illustrate the parallel between stage life and real life.

This entry was posted on May 20, 2014 by Lauren Robinson in Digital Project, Theater Collection and tagged Accidents, Actors, Broadway, Death, Murder, Suicides, Theater.