Inside the Glamour – Baumgarten Interiors

For a span of a few weeks last winter, I lived in two worlds. My real world consisted of a Brooklyn apartment filled with IKEA furniture, roommates, and the usual litany of complaints about New York City living spaces. But for eight hours a day, five days a week, I was transported back to a time when homes wouldn’t be complete without their own ballrooms, libraries, conservatories, myriad guest bedrooms denoted by what color the walls were painted and, well… you get the idea.

The six unbound albums that are loosely referred to as the Baumgarten Interiors, given to the City Museum by the antiquarian taste-maker J. A. Lloyd Hyde in 1935, show some of New York City’s most elaborately decorated homes and offices. The City Museum’s records on this gift don’t offer much in the way of details, but we have pieced together what ties all of these lavish interiors together: they were the work of William Baumgarten and his eponymous interior design company, William Baumgarten & Co. The photographs were taken in the early years of the 20th century and compiled into albums at a later date. Although Baumgarten’s clients had recognizable names such as Astor, Rothschild, and Juilliard,  his own name has faded from public memory.

William Baumgarten was a taste-maker in his own right. Originally a cabinetmaker, after emigrating from Germany in 1865 he began working for the Herter Brothers, very posh interior decorators and cabinet makers. He eventually took over the business and that’s where things get interesting. At the time, interior decorators like Stanford White (of McKim, Mead and White architectural firm fame) would travel to Europe looking for relics in good conditions to decorate the houses of the wealthy. Among the most popular items were tapestries, but there was that annoying fact of a limited supply and growing demand. To combat that, in 1893 Baumgarten created the first tapestry workshop in America; it was in the Bronx and employed 80 people who made high quality copies of the finest 18th and 19th century tapestries.  So it is not surprising to see how prominently displayed tapestries in these pictures.

After looking at a thousand images, I began to see patterns and become intimately acquainted with the au courant interior trends of the early 20th century. I’ve highlighted a few of them, just in case you need decorating tips for your next apartment.

Obviously tapestries work in both a home and an office setting…the more the better.

Animal hides were another must have. 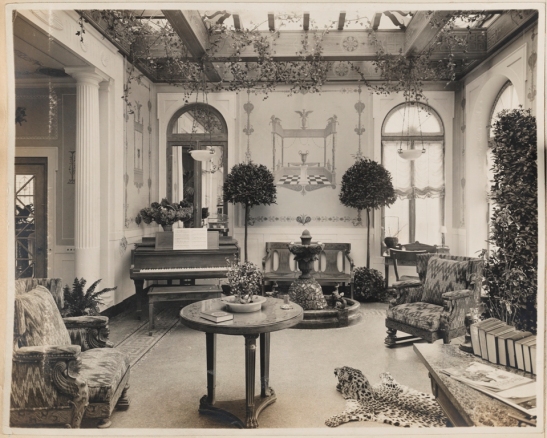 What’s intriguing is to see how the idea of home has shifted over the decades; these homes are not designed for comfort, but rather a statement of wealth and power. (Remember how much a mansion and costume ball helped cement the Vanderbilts into New York City society?)

Because really, who doesn’t need a pipe organ in the entrance hall?

Please click here to see more images of the glamorous worlds William Baumgarten created in the houses of the elite of New York City and imagine yourself having tea in the conservatory and wiling away the afternoon in your private gallery.