This week we will have a guest post from yet another one of our fabulous summer interns, Mickey Dennis, a student at Washington State University, who is currently pursuing a Master of Arts in Public History.  Mickey was with us nearly full time for two months, so he had the opportunity to really dig into some of our collections.  I turn it over to him now to share what he learned while processing the Dorothy Dignam Collection on Gramercy Park.

Dorothy Dignam started her career in the advertising business in Chicago in the 1920s. She was a prominent force throughout the advertising and copywriting fields, especially in fashion, beauty, and homemaking, during a period where men dominated the scene. Scenes from Mad Men might spring to mind. She relocated to New York City, eventually moving into No. 18 Gramercy Park and becoming an active member in the Gramercy Park community. She became the assistant editor for the Gramercy Graphic and wrote articles for local papers. Throughout the rest of her life, she collected newspapers and magazines that had articles about former and current residents, local events and buildings, and anything else that related to the quiet and exclusive community.  She also wrote segments for other publications, such as the “Special to the Villager,” pictured below.

Reproduction of “Gramercy Park,” George Bellows (1882-1925) from unknown publication, in the Dorothy Dignam Collection on Gramercy Park. Museum of the City of New York. PRO2014.3, folder 2.

As a newcomer myself to New York City – by way of growing up in Illinois, undergraduate school in Missouri, and graduate work in Washington – Gramercy Park was an unknown place to me. I’m still not even sure I pronounce it correctly 100% of the time. [That’s ok, Mickey – just remember it’s “GRAMurSEE,” not “GraMERCY ” – but you had it mastered by the end of the internship!] So when I originally sat down to process Dorothy Dignam’s Collection on Gramercy Park, I was completely unfamiliar with the park and its surrounding neighborhood. In 1831, Samuel Ruggles purchased the “Gramercy Farm” from James Duane, son of Mayor James Duane and a descendant of Peter Stuyvesant. This included the Krom Moerasje, which is the Dutch term for “crooked little swamp” and the origins of the area’s name. Ruggles filled the swamp and began developing it. He laid out an eventual 60 plots around “Gramercy Square” and deeded rights of the square to the property owners surrounding it. Because of Ruggles’s actions, Gramercy Park is one of only two private parks in New York City; the other is located in Sunnyside Gardens, Queens.  Residents of the Gramercy Park neighborhood must pay an annual fee in order to receive a key to enter the park. Key access is largely limited to owners of the original lots and members and guests of organizations which reside on the park such as the Players Club and National Arts Club.

According to Dignam’s notes on the verso of the Saturday Evening Post cover below, Falter painted the image from the window from the National Arts Club. The New York Times has even written an article about the exclusivity of the park.  However, it is not just the park itself that gives this area so much lore. Celebrities, dignitaries, artists, writers, and other prominent people have called Gramercy Park home, including: O. Henry, Samuel Tilden, Washington Irving, George Bellows, Gregory Peck, John Steinbeck, John Barrymore, Thomas Edison, Jimmy Fallon, Julia Roberts, and even John F. Kennedy.

Gramercy Park is located near many notable New York City landmarks. The Flatiron Building and Madison Square Park are a short stroll from Gramercy Park. Delmonico’s, which held numerous dinners for prestigious clubs and people and was synonymous with fine dining during the late 1800s and early 1900s, had a location in the area, and the Columbia University Club called the neighborhood home between 1910-1915. 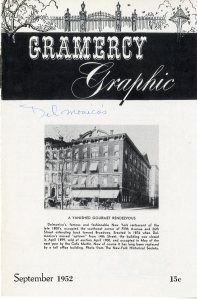 Gramercy Graphic, September 1952, in the Dorothy Dignam Collection on Gramercy Park. Museum of the City of New York. PRO2014.3, folder 4.

Many residents of the Gramercy Park neighborhood  subscribed to the Gramercy Graphic. This was the neighborhood’s own monthly publication that reported on neighborhood improvement, human interest stories of former and current residents, and local events. One can really get a sense of how residents envisioned their neighborhood after reading the “From Our Office Window” section of the Gramercy Graphic each month. In most months’ editions, the editors are very concerned about the noise level of cars, construction, and people as well as the dangers of ne’er-do-wells that stand on the sidewalk in front of businesses. They wanted to create a secluded area of peace and quiet within the commotion of New York City. Although the hustle and bustle is extraordinarily interesting and exciting, after spending the summer living in the city, I can’t exactly blame them.

Click here to see more images of Gramercy Park from the Museum’s Collections, and if that reference to Mad Men piqued your interest, be sure to check out the Museum’s upcoming exhibition, Mac Conner: A New York Life, opening this Friday September 10th.