The Museum’s New York World’s Fair collections continue to be a major resource for researchers all over the globe, and past research inquiries span a broad range of subjects, including: small format cinema technology, Cleveland artists who exhibited at the 1939 American Art building, and the Fair’s poetry contest.  The Museum first shared information about these collections in January 2013, shortly after learning we had received funding from Council on Library and Information Resources (CLIR) to embark upon a collaborative 18-month project with the Queens Museum of Art to make our collections from both the 1939/40 and 1964/65 New York World’s Fairs more accessible as a result of a generous grant from the Council on Library and Information Resources (CLIR).  This project allowed the two museums to process and describe their relatively unknown and inaccessible

World’s Fair collections and provide object-level cataloging for selected highlights from both collections.  The project was completed in the fall of 2014, and researchers can now access the collection through finding aids for both the 1939/1940 and 1964/1965 fairs, plus 1650 object level records of highlights from both museum’s collections. We have continued to share exciting finds from the collection here on the blog, and also use this material to support other relevant posts and exhibition programming.

As one could deduce from the very title, World’s Fairs are an international phenomenon, and the Museum has been contacted by researchers from Canada, Thailand, New Zealand, Czech Republic, and France in order to learn more about these collections. Many individuals—both those abroad as well as those in the United States—will never have the opportunity to visit New York City and access this material first hand, and so rely on the availability of Museum staff to facilitate remote access.

Museum staff recognized the importance of digitizing the World’s Fair collections early on, and now that archival processing is complete, we are looking for ways to further improve accessibility by making it freely and publicly available to the public, and fully searchable via our online Collections Portal.  The EMC Corporation sponsors one such opportunity for the Museum to obtain funding for digitization through their Heritage Trust Contest, and we are now a finalist in the final online round.  The outcome of this contest is determined by the public here. 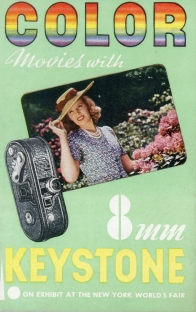 This particular project would allow the Museum of the City of New York to digitize and provide free online public access to approximately 300 Kodachrome color slides and 350 ephemera items documenting the celebrated 1939-1940 New York World’s Fair, which brought visions of a brighter future to tens of millions of Americans.  Amateur photographers William A. Dobak and George B. Bader captured the event on slides, providing a unique color perspective from the eyes of the fairgoer, in contrast to photographs already online at the Museum and elsewhere which largely document the fair through official black-and-white press and publicity photographs. The souvenirs and mementos that fair attendees brought home to commemorate their visit—programs, maps, admission tickets—complement the slides by further documenting the experience of the Fair through visitors’ eyes. This material highlights innovations the Fair displayed and cultural assumptions it revealed. For example, as Fascism rose in Europe and many Americans waited on bread lines as the Great Depression drew to a close, the 1939/40 Fair presented a vision of a better future and foretold much of modern post-war America—from the national highway system to glass skyscrapers and the spread of suburbia. Corporate pavilions showed fairgoers a modern, technological tomorrow unlike anything seen before, while International pavilions revealed how other countries represented themselves to the U.S. The ephemera collections provide a perspective on how the Fair and its exhibitors were presented to the public, and the photographs reflect that perspective. The Kodachrome medium, introduced in 1935 and the first successfully mass-marketed color film, is itself an expression of this “vision of the future.” The innate nature of the slides as small transparent objects renders them nearly inaccessible, and currently researchers must view each slide individually on a lightbox with a magnifying glass.   Digitizing these images will allow users to enlarge them up to 200%, focusing in on minute details—the text of a sign or the details of a sculpture. The ephemera collections—including handbills, admission tickets, and programs—are inherently fragile as they were intended to serve a specific, short-lived purpose: the promotion of the Fair and its exhibitors. As a result, the objects were not intended for excessive handling nor constructed from durable materials. The slides and ephemera are maintained in climate controlled rooms of the Museum’s collections storage specifically engineered for photographic or paper material; outside of the controlled collections storage environment, the objects are subject to the effects light and fluctuating temperature and humidity, leading to fading and color shift. The entire 1939/1940 New York World’s Fair Collection was rehoused as part of the previously mentioned grant. Digitizing these slides and ephemera would be the final step in ensuring their longevity by greatly reducing the need to handle the physical objects, while still providing wide access to the material. This project to digitize selections from the Museum’s 1939/1940 New York World’s Fair Collection supports the Museum’s ongoing commitment to preserve, document, and provide broad access to our vast collections of iconographic and material culture objects related to the history of New York, deepening the public’s understanding of the City and its people.

Please visit the EMC Heritage Trust Project’s contest site and cast a vote for the Museum of the City of New York if you would like to see more online content from our 1939/1949 New York World’s Fair Collection.