The Harlem River Houses complex, located along the Harlem River Drive between 151st and 153rd Streets, is a site full of firsts. It was the first public housing development in New York City funded by the federal government (along with its sister development in Williamsburg). One of its contributing architects, John Louis Wilson, Jr., was the first black graduate of Columbia University’s School of Architecture and one of the first African American architects registered in New York. It was the first public housing development to be designated a New York City landmark and placed on the National Register of Historic Places. 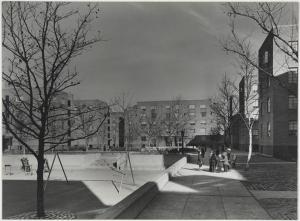 Completed in 1937 and intended for a segregated population of African Americans, the seven buildings that make up the complex contain 571 apartments that currently house over 1,000 people. More than 11,000 people applied for spots when it initially opened. Rent was $21 per month. The courtyards provided community space and a safe place for children to play, and there were child care and health care programs housed in the buildings. Apartments featured electrical lighting, steam heat, and fully equipped private bathrooms and kitchens, all things frequently missing from the substandard tenement housing that was often the only choice of black tenants in a highly discriminatory housing market. Harold Ickes of the Public Works Administration wrote, about conditions the development was intended to alleviate, “The record of the great mass of Negroes in Harlem is one of pitiless exploitation, abetted by inelastic supply within narrowly circumscribed limits, and a relentlessly ballooning demand.”

James Richmond Barthe, a black sculptor, worked on a team led by Jewish emigre sculptor Heinz Warneke to create an eighty foot bas relief frieze that celebrated African American culture and represented a Biblical exodus that equated the Promised Land with the Harlem River Houses. Unfortunately, the piece was never installed in Harlem and instead went to the Kingsborough Houses in Brooklyn, disappointing Barthe greatly. Other sculptures can be found throughout the complex, including one of John Henry and another of a woman representing motherhood.

Despite the fact that the Harlem River Houses were explicitly segregated, like all public housing at the time, the complex for many represented a move toward racial equality in the city. The inclusion of a black architect and a black sculptor on the project reinforced the idealism reflected in the thoughtful, elevated design of the complex. Mayor Fiorello LaGuardia, president of the NAACP Walter N. White, and Ickes all attended the bricklaying ceremony.

When the Harlem River Houses marked the 50th anniversary of their opening in 1987, the New York Times noted that three dozen original tenants were still living there. John Louis Wilson, Jr. returned to the complex he’d helped design and led a tour for the Mayor of Chicago, the chairman of the Housing Authority, and David N. Dinkins, who was then the Manhattan borough president but would go on to become the first (and so far only) African American Mayor of New York City.

In recent years, the Harlem River Houses have begun to show their age and work is underway to repair leaking roofs that have plagued top floor residents, and address vacant apartments have been a magnet for squatters.

This blog post is presented in conjunction with the City Museum’s exhibition, Affordable New York: A Housing Legacy, on view until February 16, 2016. If you or a family member lives or lived in the Harlem River Houses, please share your memories in the comments section. We look forward to hearing from you!

This entry was posted on November 10, 2015 by Lacy Schutz in Photography Collection and tagged Affordable housing, Harlem, Photography.