Thanks to a generous Museums for America grant from the Institute of Museum and Library Services, I have the pleasure as Collections Assistant to aid in processing over 30,000 unique images documenting theatrical productions on New York City’s Broadway and Off-Broadway stages from the Museum of the City of New York’s Theater Collection. The grant allows the museum to digitize these images and make them accessible to the public, including performing arts scholars and theater enthusiasts across the nation.

The notion of Broadway evokes glamorous stars of the stage – Mary Martin, Tallulah Bankhead, and Gene Kelly, among others. But some of the most charismatic and hardworking actors from some of Broadway’s notable productions of the past weren’t humans at all.

Animals have been acting in stage productions on Broadway for decades, providing companionship to characters and making audiences smile.  Rigorous training goes into preparing an animal for a role, teaching him or her multiple commands so that the same tasks may be performed consistently several times a week on cue. One early canine actor played Flush in The Barretts of Wimpole Street. 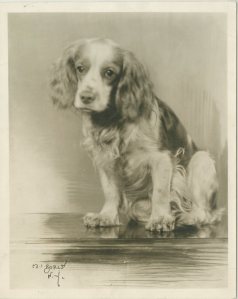 The Barretts of Wimpole Street is a play written by Rudolf Besier in 1930 and based on the romance between poets Elizabeth Barrett and Robert Browning. It opened at the Empire Theatre on Broadway in 1931 starring Katharine Cornell and Brian Aherne, and ran for 370 performances. Flush the Cocker Spaniel was not only in the original production but also in the 1934 and 1945 revivals. According to the directions written by Besier in the official play script, a dog can sometimes be more of a diva than a human actor. Besier advised: “In the original production, the dog ‘Flush’ was an actor. But since to train a dog is sometimes even more difficult than to train a human actor, it is suggested that the dog should not be allowed on stage.” This did not deter any of the Broadway productions, however, and the dog playing Flush got a sparkling review by Andre Sennwald in the New York Times in 1934: “A report on the acting would be woefully inadequate without a tribute to Flush, the Cocker Spaniel of Elizabeth. His almost human and occasionally superhuman powers of expression are so remarkable as to cause some alarm for the superiority of the human race.”

Dog trainer Paul Sydell practicing with his canine assistants Suzie, Smoothy, and Dingle-Dingle. 1961. Museum of the City of New York, 68.80.4927. 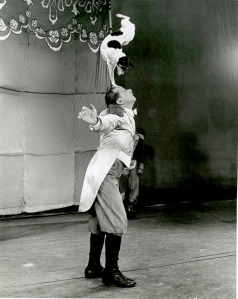 In the musical Carnival a naïve, orphaned girl is taken in as an apprentice to a traveling French circus. Opening in 1961 at the Imperial Theatre, the show included several sensational acts like stilt-walkers, trick cyclists, and of course dog acrobats Suzie, Smoothy, and Dingle-Dingle with their trainer Paul Sydell. According to the show’s original Playbill, Sydell and the dogs were a top variety act and led a very glamorous life: “They have entertained audiences in such supper clubs as the Copacabana, the Palmer House, and Chez Parce. They have played all the leading theatres including the Radio City Music Hall, and appeared on all the leading television shows including those of Ed Sullivan, Perry Como, and Patti Page. Mrs. Sydell travels with the act and cooks for Suzie, Smoothy, and Dingle-Dingle. Once a week, after their bath, they get egg yolk enlivened by a dash of cognac.” 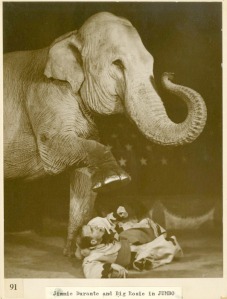 Just to show that not all animal actors come in small furry packages, Big Rosie the elephant made her stage debut in Jumbo, a musical about a financially-strapped circus which opened on Broadway at the Hippodrome Theatre on November 16, 1935. At the end of each performance, Jimmy Durante would lay down on the stage and permit Rosie to place her foot upon his head. The large, 5,000-seat theater was turned into a big top circus tent where various specialty acts, including acrobats and animal actors, performed during the show. Durante and Big Rosie apparently brought the house down at each performance with the famous ending line: when Durante tries to sneak off with Rosie, away from creditors, they ask him where he’s attempting to go with the elephant; Durante answered, “What elephant?” 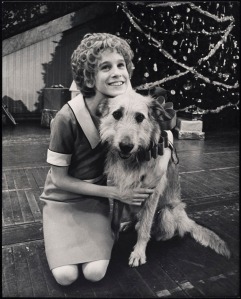 Perhaps one of the most famous animal actors of all was Sandy, named for the character he played in the 1977 Broadway production of Annie, originally starring Andrea McArdle. (She was succeeded by a fourteen-year old Sarah Jessica Parker in 1979.) Sandy had led a hard-knock life as a stray and was one day away from being put down at the Connecticut Humane Society when trainer William Berloni adopted him, paying $8 and giving him a new life in the theater. Sandy was trained to be calm in front of thousands of people and learned to heel, stay, bark on cue, and cross the stage to search for Annie night after night. He went on to appear in 2,377 performances of Annie over seven years, performing twice at the Tony awards and six times at the White House, entertaining Presidents Jimmy Carter and Ronald Reagan. Sandy’s titular autobiography, published by Simon & Schuster, told the story in the “first person” of a dog that goes from being an abused puppy to a Broadway star. Sandy’s memory is honored through The Sandy Fund, affiliated with the Humane Society of New York, which has raised over $10,000 for animal rights, welfare, and rescue. Sandy’s story is an example of a classic rags-to-riches story, proving that even a mutt from Connecticut can make it big on the stage.