The origins of dining out in New York City

The holiday season is upon us, bringing with it numerous opportunities for eating and visiting restaurants.  As we prepare the City Museum’s ephemera collections for digitization as part of a National Endowment for the Humanities grant, we’ve taken a closer look at New York’s relationship with dining through the restaurant and hotel menus in the Collection on Dining and Hospitality.

New Yorkers and visitors to the city today are able to enjoy nearly every type of cuisine, from dim sum to Swedish meat balls.  However, this hasn’t always been possible – “restaurant” was not in a New Yorker’s vocabulary until the mid-nineteenth century.  An 1825 visitors’ guide to New York, “The Picture of New York, or the Stranger’s Guide to the Commercial Metropolis of the United States,” contains information about eight New York City markets from which to procure fresh meat, fish, fruits, and vegetables, but no mention of dining establishments.  Those who wanted to eat out could visit a chophouse or tavern at a set dinner time for standard meat and potatoes fare.  Two Swiss brothers revolutionized dining in New York City when they opened Delmonico’s at the intersection of Beaver, William, and South William Streets in 1837.  Their restaurant was one of the first to allow diners to order from a menu at any time of day.  The 1838 menu from the Restaurant Français des Frères Delmonico is eleven pages long and features delicacies such as “Chicken pie with truffles” and “jumble of vegetables”.

Restaurant Français des Frères Delmonico, 1838, in the Collection on Dining and Hospitality. Museum of the City of New York. 34.295.2.

Delmonico’s earned a reputation as one of New York City’s finest dining establishments, and the concept of dining out in New York took off – until Prohibition.  Sure, you could still enjoy a multi-course meal without wine or cocktails, but it wasn’t nearly as fun.  New Yorkers and tourists instead found fun in the city’s speakeasies, like the Pirates’ Den on Christopher Street in Greenwich Village.  The establishment served a deathly-sounding Black Skull Punch, and its Pirate Band played dance music seven nights a week until 1am.

Visiting a restaurant to catch a glimpse of its celebrity proprietor is nothing new.  Jack Dempsey, a boxer and World Heavyweight Champion from 1919 to 1926, ranked second only to Babe Ruth among American sports icons in the 1920s.  He opened Jack Dempsey’s Restaurant in 1935 after retiring from boxing, and was known to frequent the restaurant’s corner booth.  A visitor could enjoy a plate of Boston baked beans, sliced Virginia ham, and Boston brown bread, and hope to have his menu signed by the professional boxer also known as the “Manassa Mauler.”

Jack Dempsey’s Restaurant, 1956, in the Collection on Dining and Hospitality. Museum of the City of New York. 85.55.1.

Many of the menus in the collection offer a snapshot of food trends, some more appealing than others. Perhaps if you are feeling full from holiday over-indulgence, you can take a look at the “Cold Platter and Diet Delights” section of the Lenox Hill Grille menu for some New Year’s resolution meal inspiration.  A “Health Salad” consisting of fruit salad, cottage cheese, and Jello on a bed of lettuce served with Melba rounds sounds like a great way to kick off 2015. 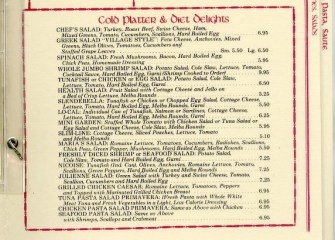 Images of ephemera from the Collection on Dining and Hospitality will soon be available on the Museum’s online Collections Portal, but in the meantime, you can check out images of New York City’s restaurants here.